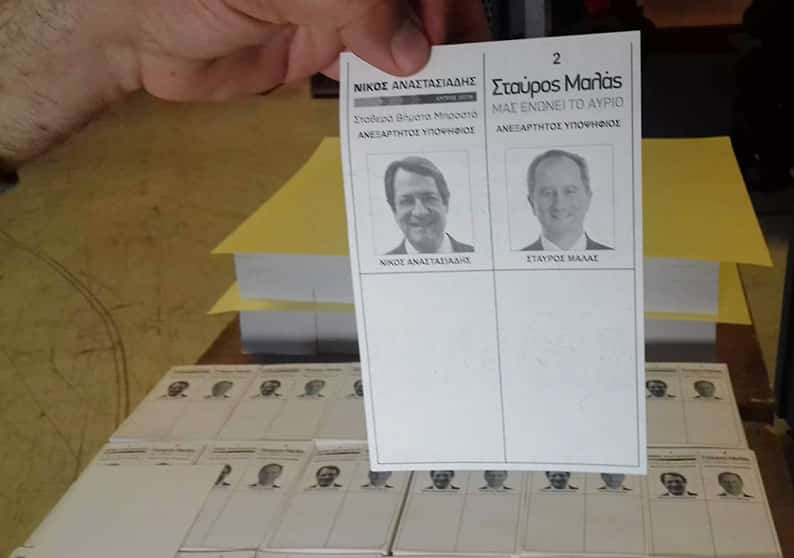 The second round of presidential elections in Cyprus is drawing closer, as the election campaign ends at midnight.

Voters are called to choose between incumbent Nicos Anastasiades and presidential contender Stavros Malas, in a runoff voting this Sunday.

The two presidential contenders face each other in Sunday’s elections, without having secured the backing of the parties that supported other candidates in the first round.

Demetris Demetriou, the Deputy Returning Officer, told CNA that all is ready ahead of Sunday’s elections.

He added that the Central Election Service is trying to resolve some problems that occurred before the first round of voting, having to do with advertising in social media and the dispatch of electoral messages, in violation of Friday’s deadline.

Both campaigns promised to close their campaigns before tonight’s deadline, Demetriou added.

The first results from small polling stations are expected soon after they close at 6pm, while the final results are expected to be announced by 7.30pm, he added.

The proclamation ceremony will take place on Sunday evening, at 10pm at the Tassos Papadopoulos – Eleftheria stadium, in Nicosia.

Demetriou said moreover that he met on Thursday with members of the OSCE mission that observe presidential elections in Cyprus.

During the meeting, OSCE members asked various questions concerning the elections and said that they will publish their report in two months, he added.