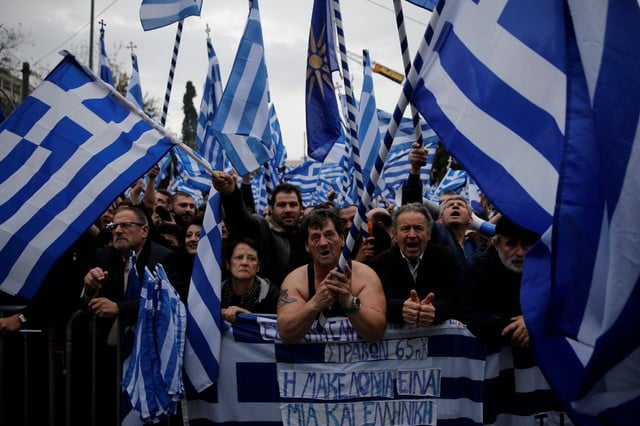 Hundreds of thousands of Greeks rallied outside parliament in Athens on Sunday to protest against the use of the term Macedonia in any settlement the government pursues with the ex-Yugoslav Republic to end a decades-old name row.

The two countries have agreed to step up negotiations, mediated by the United Nations, this year to settle the dispute, which has frustrated the aspirations of Greece’s small northern neighbour to join Nato and the European Union.

Thoroughfares in central Athens turned into a sea of people waving blue and white Greek flags in what locals said was the largest gathering in decades, easily outdoing rallies against austerity foisted by lenders on the crisis-hit country.

Greece objects to Macedonia’s name because it has its own region called Macedonia, and argues that its neighbour’s use of the name, along with contentious articles in its constitution, imply territorial claims over Greek land.

Protesters hoisted a giant Greek flag over the demonstration with a crane on Sunday. They held banners reading “Hands off Macedonia!” and chanted the national anthem.

“I’m here for Macedonia. Macedonia is ours, it’s part of Greece. We won’t let them take it from us,” said 72-year old Persefoni Platsouri clutching a Greek flag.

The case evokes strong emotions among Greeks who consider Macedonia, the ancient kingdom ruled by Alexander the Great, to be an integral part of their homeland and heritage.

Talks also reopened at a sensitive time for a country which is struggling to emerge from its worst debt crisis in decades and to regain sovereignty over economic policy-making after years of austerity mandated by international lenders.

Among Sunday’s speakers was world-renowned Greek composer Mikis Theodorakis, who said the eight-year economic crisis had not wiped Greece’s history from people’s memories.

“If we give in, we are leaving the doors wide open for a tragic historical lie to come through and stay forever,” the 93-year old leftist, a symbol of resistance against the 1967-1974 military junta, told a cheering crowd.

Talks between the two countries have been inconclusive since the Balkan state broke away from Yugoslavia in 1991.

Due to Greece’s objections, Macedonia was admitted to the United Nations with the provisional name “The Former Yugoslav Republic of Macedonia” in 1993, which remains its official title in international organisations. A majority of countries in the world refer to it simply as Macedonia.

Greece’s leftist-led government has proposed a compound name, with a geographical qualifier, which would be the only name that could be used for the country.

But opinion polls in recent weeks have shown a majority of Greeks oppose the use of “Macedonia” in any solution. About 300,000 people turned out at a demonstration on Jan. 21 in Thessaloniki, capital of Greece’s Macedonia region.

The Macedonia issue helped bring down Greece’s conservative government in 1993; the same party, now in opposition, has criticised Tsipras’ administration for its negotiating tactics.

Foreign Minister Nikos Kotzias said last week that Greece is preparing proposals which would be the basis of negotiations for a settlement with its neighbouring country.

“Here are the borders. This is Macedonia … Macedonia is Greek, no one can take this name, no one can use it,” said protester Rania Mainou, pointing on a map.

Palace fight back to draw relegation tussle with Newcastle