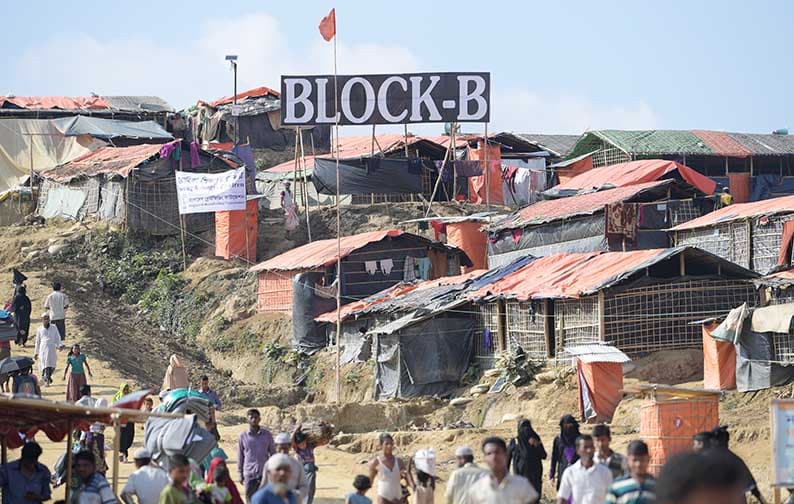 Nobel Peace Prize winners sometimes go on to undistinguished later careers, and some seem to have got the prize by mistake. Barack Obama, for example. But there has never before been one who went on to become a genocidal criminal.

Aung San Suu Kyi, Myanmar’s elected leader, richly deserved the Nobel Peace Prize for her thirty-year non-violent campaign (much of it spent under house arrest) to restore democracy in the country. Two years ago, when she finally became the de facto prime minister, her reputation was as high as that of Nelson Mandela.

Hardly anybody had noticed an interview she gave in 2013 in which she said that Buddhists in Rakhine province live in fear of “global Muslim power”. You know, the same global power that lets Muslims dominate the world’s refugee camps. (Muslims make up three-quarters of the world’s refugees, although only a quarter of the world’s population.)

Back then, this was merely a bizarre remark and Suu Kyi was still a saint. The Muslims of Rakhine state, known as Rohingya, were having a hard time at the hands of the authorities, but it wasn’t her fault, and there was no ethnic cleansing yet. There is now, however, and she is fully complicit in it.

When at least 7,000 Rohingya have been murdered, thousands more have been raped, and 700,000 have fled across the border into Bangladesh, leaving behind another half-million of whom many are in ‘internment centres’ (concentration camps), you can legitimately call it ethnic cleansing. Or genocide, if you want to get legalistic about it.

The Myanmar government claims that the Rohingya are really illegal immigrants from Bangladesh. It even refuses to use the familiar word ‘Rohingya’ any more, insisting on referring to them only as ‘Bengalis’ or ‘Bengali terrorists’. That is a despicable lie.

Rakhine state, between the Arakan mountains and the Indian Ocean, was a separate empire until the Burmese army came over the mountains and conquered it in the late 18th century. Most of its people spoke a dialect of Burmese, but a big minority spoke Rohingya, an Indo-Aryan language related to Bengali.

The Rohingya have been in Rakhine at least since the 1660s. The fact that they were Muslims posed no problem for the Buddhist kingdom of Arakan (Rakhine), which was heavily influenced by the Islamic sultanates of eastern India. The Burmese conquerors of Rakhine, and the British empire that followed, didn’t see the Rohingya as a problem either.

The independent Myanmar republic founded in 1948 was different from the start. Only two-thirds of Myanmar’s 53 million people are Bamar (ethnic Burmese), but most of the other ethnic groups share the same Buddhist religion. Nation-building requires a common identity, so Buddhism got the emphasis – and the Rohingya, as Muslims, were automatically excluded.

Bit by bit the military regime that had seized power in 1962 took away the Rohingyas’ land rights, their civil rights, and in 1982 even their citizenship. They were redefined as illegal immigrants, and the local Buddhist population launched occasional pogroms against them.

The anti-Rohingya policy always played well with Bamar nationalists, who are obsessed with the alleged threat posed by Islam. (Only four per cent of the country’s population is Muslim, and only half the Muslims are Rohingya.) It’s the one regime policy that is genuinely popular with most of the population, so the army resorts to it whenever it hits a rough patch. It’s losing power now, so it reflexively turns to the old remedy again.

Two years ago you could still argue that a wobbly democratic government led by Aung San Suu Kyi had to pick its battles carefully. The Rohingya was one that it couldn’t win, so best avoid it and let the military have its way. But that was before it turned into a full-blown genocide last August.

Tactical calculations of political advantage cannot justify mass murder, and it has become clear that Suu Kyi is willing to ignore mass murder if the victims are Muslims. Former US ambassador to the United Nations Bill Richardson, who has known her for more than 30 years, is close to despair.

“She’s changed,” he told CNN last week. “She’s become, unfortunately, a politician afraid of the military and afraid to make the tough decisions to resolve one of the worst humanitarian crises in history.” And (although Richardson didn’t say this), she also probably feels the same unjustified hatred and fear towards the Rohingyas, and Muslims in general, as the general population.

Meanwhile, the 700,000 Rohingyas suffering in rudimentary refugee camps in Bangladesh have been told that they can start going home next month, but people who have seen their villages razed and family members raped, shot or burned to death are a bit reluctant to trust the Myanmar army. Especially when they have no guarantee that they won’t end up in grim ‘detention centres’ back in Rakhine.

Taking the Nobel Peace Prize back from Aung San Suu Kyi wouldn’t help matters in Rakhine at all, but it would do the standing of the prize a lot of good.

Partition it is, though they dare not speak its name

A brutal past is no case for Catalonian independence