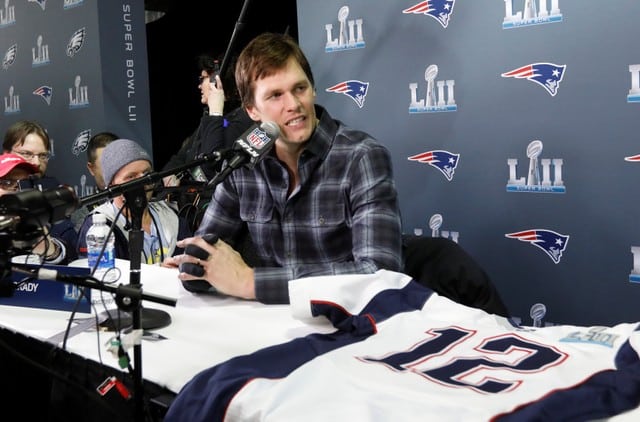 The New England Patriots band will break up after Super Bowl and they have every intention of going out on a high note when they take on the underdog Philadelphia Eagles in Sunday’s National Football League championship game.

Playing in their third Super Bowl in four years the Patriots success could be their dynasty’s demise with offensive coordinator Josh McDaniels and defensive mastermind Matt Patricia poised to move to the head coaching ranks soon after the Vince Lombardi trophy is hoisted.

The three pillars of the Patriots empire, quarterback Tom Brady, coach Bill Belichick and owner Robert Kraft, remain in place but even there cracks in the foundation have begun to appear with an ESPN report this month detailing dissension at the top of the New England ranks.

The Patriots, however, have rarely been distracted from their objective. Even the Deflategate scandal that swirled around the team in 2015 could not cause them to lose focus as they beat the Seattle Seahawks to be crowned champions.

“We prepare for all situations that we can going into a game,” Belichick told reporters. “We have a game plan, as the game unfolds then we’ll adjust as we go.

Brady and Belichick have teamed up to win five Super Bowls, including two in the last three years and another on Sunday would tie them with the Pittsburgh Steelers for the most by any franchise.

Number six will once again hinge on the arm and play of their evergreen 40-year-old quarterback, who has faced as many questions about retirement during Super Bowl week as he has about the Eagles pass rush.

Statistically, there certainly would seem no good reason for Brady to hang up the cleats.

He led the NFL in passing yards this season with 4,577 while his 32 touchdown passes ranked third.

For those looking for a sign of decline there has been none.

He has his team back in the Super Bowl for the third time in four years and has had the type of season that has once again placed him in the most valuable player conversation.

Brady could be without his favourite target in tight end Rob Gronkowski, who remains under concussion protocol, but will have plenty of weapons at his disposal including Danny Amendola, who had two touchdown grab catches in their comeback win over the Jacksonville Jaguars in the AFC championship game.

The Patriots and Eagles have met once before in the Super Bowl, in 2005 when New England beat Philadelphia 24-21 and Brady will be the only player from either team on the field on Sunday who took part in that game.

The Eagles have made it to their third Super Bowl despite losing number one quarterback Carson Wentz to a knee injury in Week 14 after leading his team to a 10-2 record.

The loss looked a devastating blow to the city’s hopes of celebrating a first Super Bowl title but back-up Nick Foles has stepped up, leading Philadelphia to playoff wins over the Atlanta Falcons and Minnesota Vikings.

The key to victory for Philadelphia will be the play of their defensive line, which is among the league’s best, and putting pressure on Brady.

The Eagles will give the Patriots the respect they have earned and deserve but will not be intimidated.

“All I can tell you is, we’re coming home with that trophy,” Philadelphia wide receiver Alshon Jeffery said.