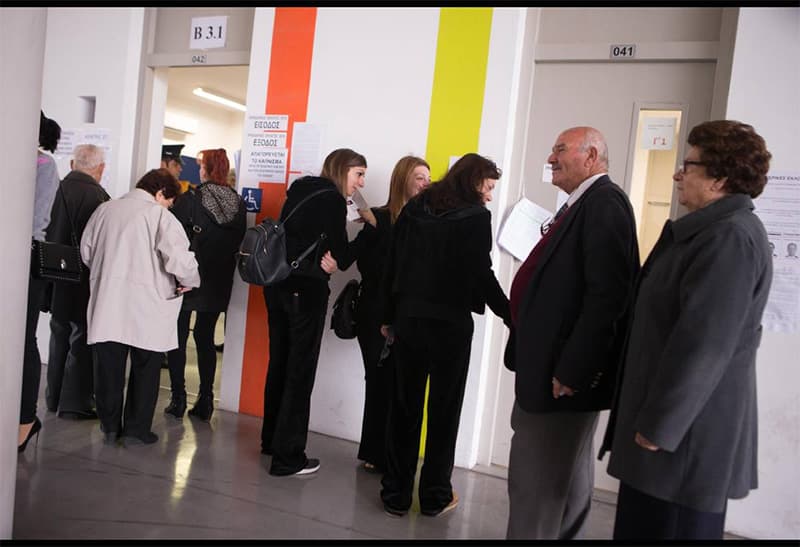 In total 73.9 per cent of registered voters cast their ballot on Sunday in the second round of the presidential elections.

Incumbent Nicos Anastasiades was re-elected with 55.99 per cent of the vote, giving Akel-backed independent candidate Stavros Malas 44.01 per cent.

Overall turnout, which was announced every few hours, was slightly higher than that of the first round, but lower by almost seven points than the turnout for the 2013 presidential runoff.

According to the central elections service, of the 550,876 registered voters, 73.9 per cent cast their ballot, 2.1 points higher than the first election round last week.

Abstention was at 26 per cent, 3 per cent of voters cast a blank ballot while 2.6 per cent of the ballots were deemed void.

The highest turnout was recorded in the Famagusta district where 77.1 per cent of registered voters cast their ballot, and the lowest in Paphos with 69.2 per cent. Turnout in Larnaca was 76 per cent, in Nicosia 73 per cent and 71.8 per cent in Limassol.

Anastasiades got the most votes ¬ 62.8 per cent – in the Famagusta district which is a traditional stronghold of ruling Disy while Malas’ highest numbers were in Paphos, where he got 47.6 per cent.

Paphos had showed overwhelming support for Diko leader Nicolas Papadopoulos during the first-round last week, giving him 37.98 per cent of the vote.

Anastasiades also took the lead among overseas voters as he received 51.1 per cent and Malas got 48.8 per cent.

During the last presidential race in 2013 voter turnout was 80.7 per cent, which was considered low at the time.

An hour before the polling stations closed turnout stood at 67.8 per cent, 1.6 points lower than voter turnout at the first round of the presidential elections last Sunday. In the 2013 runoff, turnout was 76.1 per cent.

More than half of registered voters – 53.2 per cent – had cast their vote three hours before the polling stations closed. The turnout at the same time during last Sunday’s first round of the elections was 50.9 per cent. In the 2013 runoff, the turnout stood at 58.7 per cent.

Last week, a total of 71.4 per cent of voters cast their ballot. Anastasiades garnered 35.5 per cent of the votes in the first round and Malas 30.2 per cent. Turnout in Nicosia last Sunday was 72 per cent, Limassol 69 per cent, Famagusta and Larnaca both 71 per cent, Paphos 74 per cent and overseas, 71 per cent. Abstentions had reached 28.12 per cent, invalid votes 1.48 per cent, and blank votes 0.87 per cent.

A blend of musical flavours