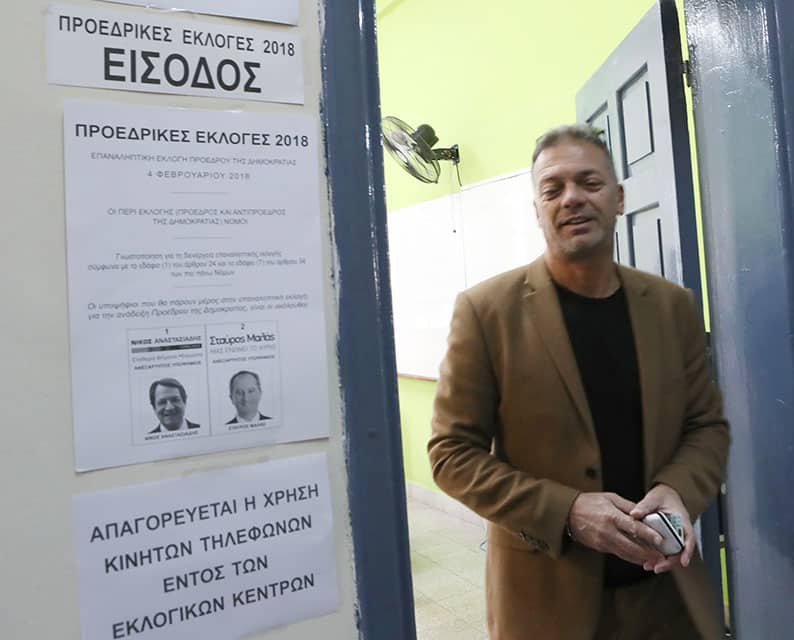 Only a few hours before polls closed, 53.2 per cent had cast their vote, up from 50.9 per cent last Sunday.

The largest increase in voter turnout was observed in Limassol with 4.8 per cent compared to last Sunday, while in Paphos there was a 4 per cent drop.

Exit polls, which were relatively accurate last week are to be announced at 6pm.

Political leaders as well as candidates found a common thread in their statements urging on the public to go out and vote.

Malas said today was the day for people to make a choice and made special reference to single mothers, women, refugees, the youth, working people and those on the receiving end of the 2013 haircuts deposits, saying it was their day.

It was also the day of health and education professionals who are concerned about what kind of reforms await their respective fields, he said.

Incumbent Anastasiades urged the public to vote because “abstention means tolerance.” The country still has problems which need to be faced but “irrespective of who wins, tomorrow is a new day for all of us.”

A total of 7,000 government employees are working for the elections today, of which around 2,000 are police officers. One thousand are unemployed persons.

Diko leader Nicolas Papadopoulos, who ran for the presidential seat but lost after coming third to Malas and Anastasiades, said “elections will be over tomorrow but problems will remain.”

“Society is waiting for whoever is elected president and all of us, to deal with these problems…myself and Diko will move towards this end.”

The latter expressed her wish that “whoever is elected, after such a long pre-election campaign will have the divine light…to allow Hellenism to survive on Earth as it has in the past 4,000 years.”

Sizopoulos said his part is ready to work with both candidates while Perdikis said people should get over their feeling of disappointment and vote.

Citizens’ Alliance leader Giorgos Lillikas, who ran and failed with his presidential candidacy coming in fifth place noted that “as of tomorrow, we turn over a new leaf. Challenges will remain and we will all have to cooperate.”

Disy leader Averof Neophytou said the real problems were not political rivals but the problems people had to face while Akel general secretary Andros Kyprianou expressed his hope that “tomorrow brings a better day for Cyprus and the people of Cyprus – for Greek Cypriots, Turkish Cypriots, Maronites, Armenians and Latins.”

“This time last year, we hoped a solution (to the Cyprus problem) was just around the corner. Now, we’re extremely concerned because we don’t know what tomorrow will bring.”

“This is why the way we act in these elections has great importance.”

Meanwhile former President Demetris Christofias said he hoped the choice people made today would be the one that would bring about “true democracy” that would “impose social justice and impose solidarity.

“The people will make the final decision and we will respect it.”