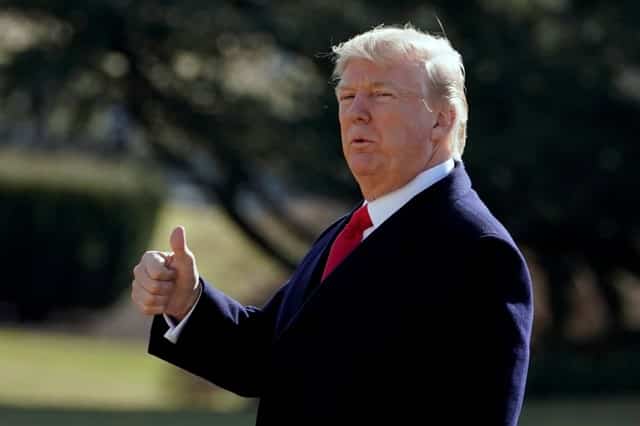 Trump used Britain’s National Health Service (NHS) to make a domestic political point arguing against the provision of universal healthcare, but in doing so was perceived to have bad-mouthed a system held dear by his country’s closest ally.

“The Democrats are pushing for Universal HealthCare while thousands of people are marching in the UK because their U system is going broke and not working. Dems want to greatly raise taxes for really bad and non-personal medical care. No thanks!” Trump tweeted.

Britain’s health system delivers free care for all. It is typically one of the most important issues for voters during elections and often regarded as a weakness for May’s Conservative, or Tory, Party, whose opponents accuse the government of inadequately investing in it.

Twitter users flooded to defend the NHS, with many pointing out that the march Trump referred to was organised by groups which want to increase the health service’s funding, not dismantle it.

The rally drew 60,000 people to central London on Saturday according to one of its organisers, Health Campaigns Together. Protesters demanding more funding for the service marched on Prime Minister Theresa May’s office.

Even Health Secretary Hunt, one of the main targets of the protesters’ anger, snapped back sharply at Trump.

“I may disagree with claims made on that march but not ONE of them wants to live in a system where 28 (million) people have no cover. NHS may have challenges but I’m proud to be from the country that invented universal coverage – where all get care no matter the size of their bank balance,” said Hunt.

Opposition Labour Party leader Jeremy Corbyn tweeted back to Trump: “Wrong. People were marching because we love our NHS and hate what the Tories are doing to it. Healthcare is a human right.”

Last month May apologised after the health service postponed tens of thousands of non-emergency operations to free up staff and beds to deal with emergency patients.

Trump’s latest Twitter outburst against Britain comes only a week after he offered to apologise for a row triggered last year by his reposting of anti-Muslim videos originally posted by a leader of a British far-right fringe group.

He also drew scorn from across the British political spectrum last year for criticising the mayor of London after attackers drove a van into a crowd and stabbed people near London Bridge, killing eight.

May was the first international leader to visit Trump in Washington after his inauguration last year and has given him an invitation on behalf of Queen Elizabeth for a state visit. Trump was due in London to open a new US embassy building this month but cancelled the visit.