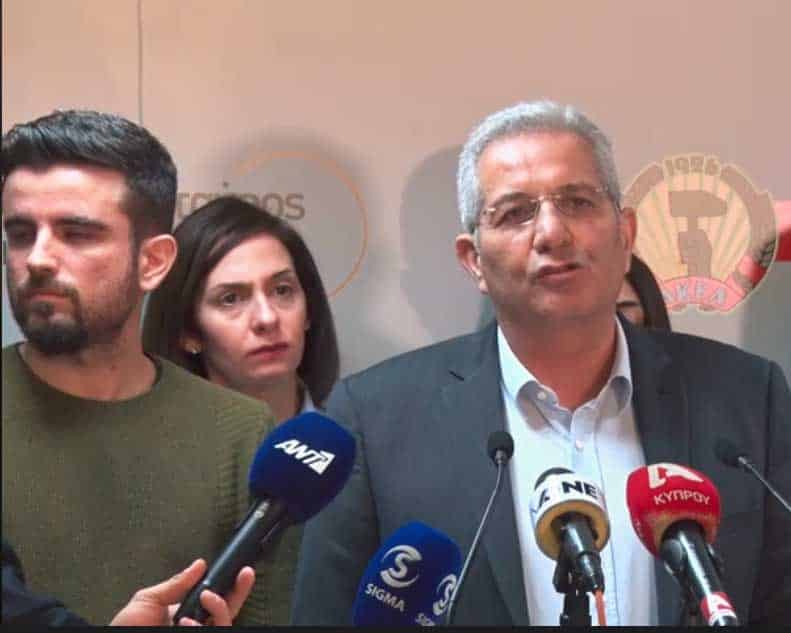 A war of words broke out on Monday with the losers of the presidential election race all blaming the others for failing to prevent the re-election of Nicos Anastasiades.

The fighting begun after Akel leader Andros Kyprianou in his speech on Sunday night after the final election results indirectly blamed the so-called parties of the centre for not sticking to their initial promises to work toward stopping an Anastasiades victory.

Kyprianou apologised to the public that Akel was not able to achieve this goal.

“Unfortunately, the parties of the so-called centre, while heavily insisting on the same goal, at the most critical time chose to wash their hands of this. This unfortunately confirms their inconsistency,” he said.

Kyprianou was referring to Diko, Edek, the Greens and the Solidarity Movement that backed Diko leader Nicolas Papadopoulos who was knocked out in the first round and then refused to support Stavros Malas.

This prompted Edek leader Marinos Sizopoulos to reply on Monday that Anastasiades had not won the elections, but rather the Akel leadership lost the race due to their “possibly intentional handling”.

Sole responsibility for the outcome, he said, lay with both Akel and Malas which ruled out from the beginning any possibility of cooperation by insisting on the full adoption of Malas’ positions “without accepting the possibility of investigating possible convergences, mainly on the Cyprus problem”.

This, he said, would have led to cooperation, not to secure any perks and ministerial positions, but to establish a common line on the Cyprus problem.

Malas, Sizopoulos said, did not accept any of Edek’s positions, and the party felt that without even minor convergences, Malas’ candidacy would not be one of change but rather a variation of Anastasiades’ policy.

Diko general secretary, Marinos Mousiouttas, too justified his party’s stance by citing Malas’ refusal after the first round to stray from his programme’s proposals.

This was the first time that political parties representing around 25 per cent of the electorate opted to remain on the sidelines and not seek to capitalise from any alliances with the final two candidates.

Diko, Edek and the Greens urged their supporters to vote according to their conscience, citing unbridgeable approaches on the Cyprus problem, the economy and internal governance. The Solidarity Movement asked its backers not to abstain and to “definitely exercise their right to vote by not voting for ny of the two candidates”, in effect, calling on them to cast a blank vote.

Far-right Elam and the Citizens’ Alliance also left the decision up to their supporters.

Banks in Britain and US ban Bitcoin buying with credit cards