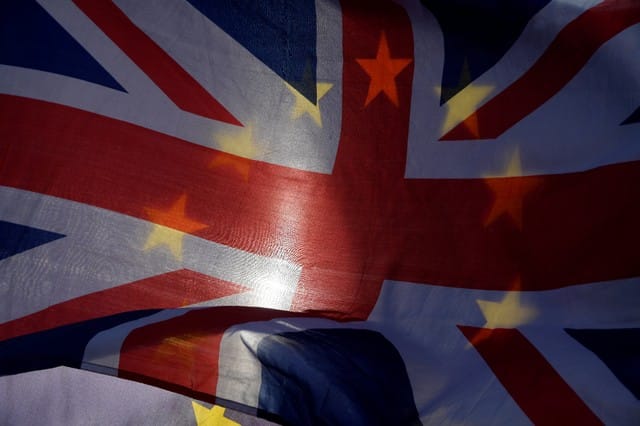 File photo: Anti-Brexit demonstrators wave EU and Union flags outside the Houses of Parliament in London

A Scottish court rejected on Tuesday a legal attempt to ask the European Court of Justice (ECJ) to clarify whether Britain could unilaterally stop the Brexit process.

The case was brought by a group of anti-Brexit lawmakers in an attempt to show that Britain’s decision to leave the European Union could be reversed if London withdrew its notification of Article 50 – the process by which Brexit was formally initiated.

But judge J. Raymond Doherty of Scotland’s top civil court declined to refer the matter to the ECJ.

“I am not satisfied that the application has a real prospect of success. Permission to proceed is refused,” he said.

A lawyer for the group who brought the case said they would appeal against the ruling.

At stake is an attempt to clarify whether Britain theoretically has the option of unilaterally withdrawing its Article 50 notification, regardless of whether the 27 other EU members authorise it to do so.

To date, there are no plans to stop Brexit and opinion polls have shown no clear sign of a change of heart. In 2016, Britain voted to leave the EU by 52 to 48 percent.

But a recent poll showed most Britons would support a vote on whether or not to leave once the terms of departure are known. And British lawmakers defied the government in December by giving parliament a much more substantial say on whether to accept the final Brexit deal.

Prime Minister Theresa May’s government is divided on exactly what the terms of Brexit should be but is clear that Britain will be leaving the European Union in March next year.

Anti-Brexit campaigners have been arguing that once the negotiated terms of Brexit are known, lawmakers should be given the option to vote on the deal. In that case, one of the options should be to reverse Brexit and stay in the EU, they say.

Jo Maugham, a lawyer funding the Scottish legal case, said the case was plainly in the national interest.

“I will support an appeal against this decision – to the Supreme Court if necessary,” he said.

He argues that while there is no doubt that Britain could stop Brexit with the permission of the other 27 members, it should seek to establish a legal right to do so unilaterally whether the rest of the bloc likes it or not.

“To improve the bargaining position of the UK, to ensure we retain the opt-outs and rebates that we presently enjoy, and to place the decision entirely in the hands of the UK’s Parliament and – if it chooses – its people, we must seek to establish a legal route to revocability,” he wrote in an explanatory blog.

Tuesday’s decision can be appealed in Scotland and then, if permission is granted, to the UK Supreme Court in London. From there it could be referred to the ECJ, which rules on the meaning of EU law.

The lawmakers behind the challenge represent electoral areas in Scotland which voted strongly to remain in the EU in the 2016 referendum, against the grain of the United Kingdom which as a whole voted to leave.