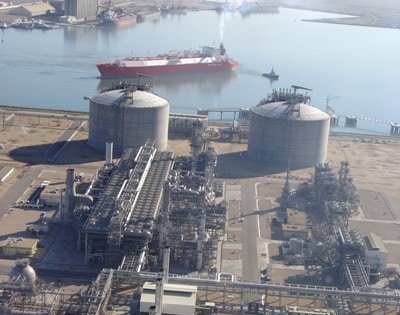 The LNG plant at Damietta, Egypt

ENI and Total may have made a substantial gas discovery at their Calypso prospect in Cyprus’ offshore block 6, according to reports in the foreign press.

Israeli financial daily Globes has reported that the Calypso field may contain an estimated 170-230 billion cubic metres – corresponding to between 6 and 8.1 trillion cubic feet (tcf).

By comparison, the Aphrodite prospect in block 12 holds an estimated 4.5 tcf of natural gas.

The Globes article comes on the back of statements made late last week by energy minister Giorgos Lakkotrypis, who hinted at a gas find in block 6.

Lakkotrypis had said the findings were encouraging, but that more time was needed for analysis in order to provide final confirmation.

But he did go on to suggest that an announcement from the companies could be imminent.

But the same sources added that the reports “should be taken with a grain of salt, because Cyprus is currently in the middle of an election campaign”.

The Israeli news outlet stated that the Cypriot gas find, if confirmed, did not bode well for Israel’s export plans.

“At a time when there are still not enough contracts to develop the second stage of Leviathan, and it is unclear when export contracts will be signed, Cyprus is likely to become one of the main players in the natural gas market,” it reported.

The problem for Israel is the long lead time in developing and monetising gas reservoirs.

Globes drew a comparison between Israel’s Leviathan reservoir, discovered in 2010 and expected to begin supplying gas no sooner than 2020, and ENI’s Zohr find in Egypt, which the company was able to develop in two-and-a-half years.

It noted also that ENI is a partner in the Damietta liquefaction facility in Egypt, which is likely to make it even easier for Cyprus to export gas to Egypt.

Moreover, ENI and Total, operating in Cyprus, do not face financing challenges.

Daily Phileleftheros meanwhile reported that the mooted reservoir at Calypso may extend into adjacent blocks.

According to energy analyst Charles Ellinas, these reports are “somewhat strange”, given ENI’s strategy of not disclosing any information until there is final corroboration from an analysis of the drill cuttings.

He surmised that, whatever the results at Calypso are, an official announcement from the companies – who are bound by stock market rules – might take a little longer.

Regarding Globes’ concerns about Cypriot gas edging Israel out in the Egyptian market, Ellinas said he was unconvinced with this line of thinking.

“It is doubtful whether anyone – be it Cyprus or Israel – will export gas to Egypt, as Egypt is expected to become self-sufficient in its power needs by June or July this year,” he said.

That leaves the option of liquefying Cypriot gas at the Damietta plant for export to Europe.

But as things stand, the liquefaction surcharge would make Cypriot gas uncompetitive in European markets.

Our View: No place for cliches about unity. We need a leader