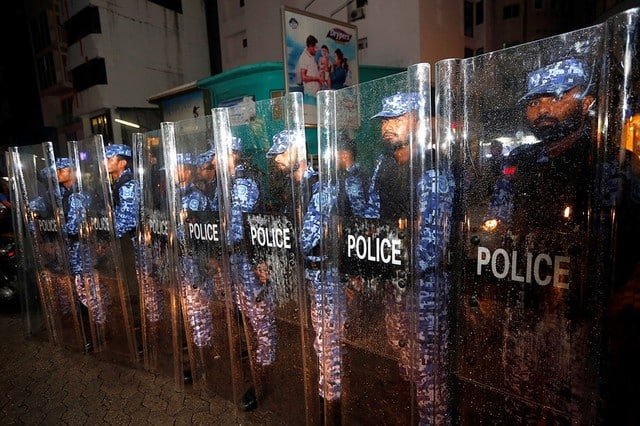 Maldivian police stand guard on a main street during a protest by opposition supporters against the government's delay in releasing their jailed leaders, including former president Mohamed Nasheed, despite a supreme court order, in Male

An exiled former president of the Maldives urged India on Tuesday to send an envoy backed by the military to release political detainees after the government of the Indian Ocean archipelago imposed a state of emergency and arrested two senior judges.

Having defied the court ruling, President Abdulla Yameen ordered security forces to seize control of the court and arrest the chief justice and another judge.

Nasheed, who was granted asylum by Britain after the government allowed him to leave jail for medical treatment abroad in 2016, sought Indian intervention to resolve the island’s most serious political crisis in years.

“On behalf of Maldivian people we humbly request: India to send envoy, backed by its military, to release judges & pol. detainees… We request a physical presence,” Nasheed, who is currently in Colombo, said in a Twitter post.

He also urged the United States to block financial transactions of Yameen’s government.

Since Yameen took power in 2013, his government has faced repeated questions over freedom of speech, the detention of opponents and the independence of the judiciary.

His office said he was acting in the interest of public safety in imposing emergency for 15 days.

“The President has been compelled to declare a state of emergency due to the risk currently posed to national security,” the statement issued on Monday said.

Located near key shipping lanes, the Maldives has assumed greater importance after China began building political and economic ties as part of its so-called ‘String Of Pearls’ strategy to build a network of ports in the Indian Ocean region.

Having historically held more clout in the islands, India has sought to push back against China’s growing influence there.

India, the United States and Britain have urged Yameen to honour the rule of law and free the detainees.

Indian intervention in the Maldives would not be unprecedented, as New Delhi sent troops in 1988 to foil a coup, purportedly involving foreign mercenaries.

The US State Department said it was “troubled and disappointed” by the state of emergency and the failure by the president, army and police to obey ‎a lawful Supreme Court ruling.

“President Yameen has systematically alienated his coalition, jailed or exiled every major opposition political figure, deprived elected members of parliament of their right to represent their voters in the legislature, revised laws to erode human rights … and weakened the institutions of government,” it said in a statement.

Police also detained Yameen’s half-brother, Maumoon Abdul Gayoom, who had ruled the Maldives for 30 years until 2008 and now stands with the opposition.

Any Indian involvement would risk raising tensions further in the archipelago of 400,000 people and intensify the rivalry with China.

Aside from the intervention in 1988, India has generally tried to avoid meddling in the Maldives‘ internal affairs, although it has continued to provide military and economic assistance.

The tumult comes during the peak tourism season in Maldives, best known for its luxury resorts. China, the United States and India have already issued travel advisories against travel to the tropical islands.

“It has affected business. We have advised our operators to not sell Maldives packages. Thankfully our clients are back but we are not booking any more. It’s like a coup there, worse than earlier,” said Raman Singh Taneja, Managing Director, Flexi Tours Pvt Ltd in New Delhi that sends tour packages.

Tourism brought in $2.7 billion of revenue for the Maldives in 2016.

The Maldives is made up of 26 coral atolls and 1,192 islands. Politics centres on the tiny but densely populated capital Male.

Police said in a Twitter message they had arrested Chief Justice Abdulla Saeed and another judge “for an ongoing investigation”, without giving details.

They also arrested another former president Gayoom at his residence, along with his son-in-law. Gayoom’s son Faris, who was one of the opposition figures ordered freed by the court, was released on Tuesday, his lawyer told Reuters.

Others remain in prison.

In a recorded video sent to social media, Gayoom said he was being taken to the prison island of Dhoonidhoo: “I have not committed any crime. This arrest is unlawful. I will remain strong, and I ask the beloved people to remain strong.”

We are 95 per cent of the way to a coalition deal, German SPD says