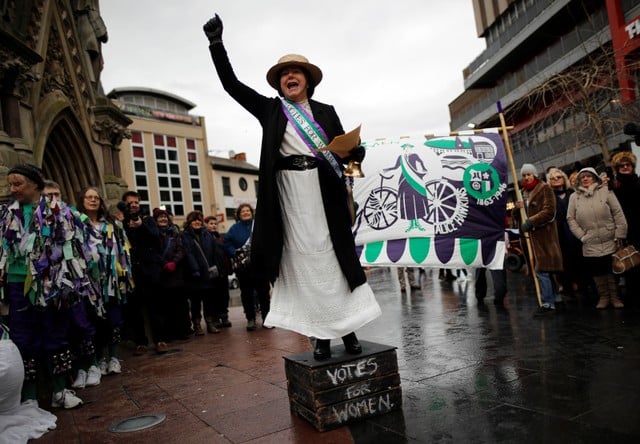 “Be yourself” and not a “stereotype of a man” is the advice British Prime Minister Theresa May would have given her younger self, she said on Tuesday, calling for more women to enter politics 100 years after they first won the vote.

At a speech in the northern English city of Manchester, the birthplace and home of British suffragette leader Emmeline Pankhurst, May called for measures to better shore up democracy: an end to online abuse and steps to protect newspapers.

May, Britain’s second woman prime minister after Margaret Thatcher, hailed the achievements of women in politics since the Representation of the People Act first gave some women the right to vote in 1918, after years of struggle that saw Pankhurst and others jailed and force-fed while on hunger strike.

But she said there was still more to do to make politics an attractive prospect for many more.

Asked what she would have told herself when she first entered parliament as a lawmaker in 1997 alongside only a handful of other Conservative women, she said: “I would say be yourself, don’t feel you have to be a sort of stereotype of a man in order to get on in politics.”

“Be yourself and believe in what you’re doing.”

When Thatcher took office in 1979 only 3 percent of lawmakers in parliament were women. In last year’s election, women won a record 208 seats but were still outnumbered by men more than two to one in the 650-seat House of Commons.

May enjoyed a honeymoon in the opinion polls when she took power after Britain voted to leave the European Union in 2016. But since losing her Conservatives’ majority in parliament in an ill-judged election in June, her leadership has been questioned.

Critics say her cautious approach has increasingly left her hostage to the deep divisions among her ministers, especially over Brexit, with some concerned the EU has now gained the upper hand in talks. On Monday, the EU said it was time for Britain to make a choice on their future ties.

Asked earlier by the BBC what she would say to the critics: “I put a much greater focus on not what you say but on what you do, and I guess that is another difference perhaps between women sometimes and men.”

Under pressure, the former interior minister returned to a favoured refrain in Manchester, renewing her call for a fight against online abuse, which she says often targets women lawmakers more than men. She called for another look at laws.

She also announced a review into local and national media, struggling to compete with online content, to look at whether publishers were getting their fair share of digital revenue to try to reverse a decline in “trusted and credible news sources”.

“As we remember the heroic campaigners of the past, who fought to include the voices of all citizens in our public debate, we should consider what values and principles guide our conduct of that debate today,” she said

N. Korea ‘months away’ from ability to hit US with nuclear weapon