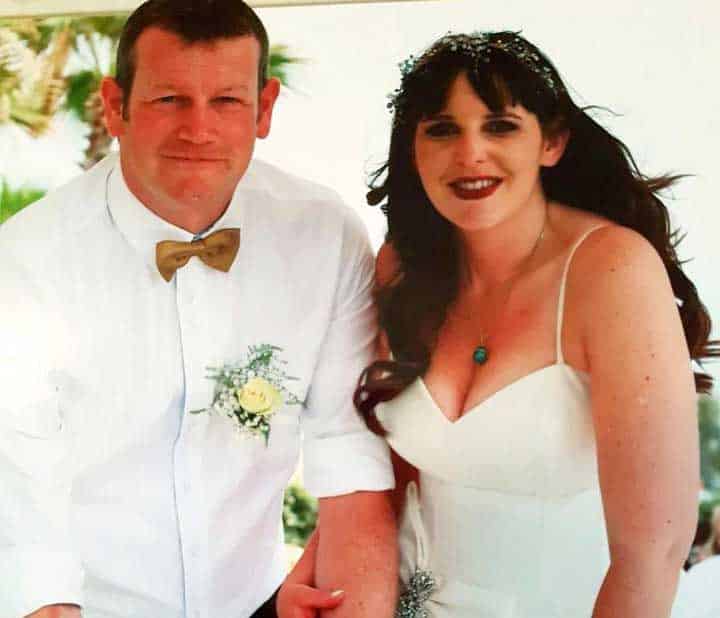 A British bride, who was rushed to hospital in a blood-soaked wedding dress after a freak accident at her Paphos wedding last year, has spoken out about the trauma in the UK press to encourage others to seek professional help after suffering anxiety following the accident.

The Independent reported on Tuesday that Kaileigh Moreton, 29, had to be rushed to hospital in her wedding dress after a wheelchair sliced through her Achilles tendon at her 17-guest wedding to partner of 12 years, Phil, 39, on May 2, 2017.

The newspaper reports that she suffered “excruciating pain” after an exposed piece of metal on the chair’s footrest cut through her lower leg.

She was injured at her wedding party at a five-star hotel in Paphos, after a guest borrowed the chair missing a protective rubber stopper from a hotel during the reception.

“It was just a freak accident,” she said.

“I was on the dance floor. The last thing I remember was ‘Ain’t No Mountain High Enough’ playing and suddenly feeling a sharp pain in the back of my foot. I turned one way and the chair turned the other. A rubber stopper was missing, it acted like an apple corer and it went straight through my heel.”

The bride said that she remembered holding on to her mum’s arm and saying that it hurt.

“The only way I could describe it would be floppy – like there was nothing there to hold it up, which there wasn’t. The first thing that was going through my mind was what if I cannot walk again?”

The newspaper reports that an on-site medic bandaged her leg and attempted to stem the bleeding as a taxi was called.

“A traumatic incident on your wedding leaves you feeling quite emotional about it, I suppose there’s a part of you that asks why this did happen to me,” she said.

The Mirror newspaper reports that ten months on, Kaileigh is still undergoing physiotherapy on the affected calf, which is still two inches smaller than her right.

She described the injury is ‘isolating’ as you are unable to do anything. “There is a fear of it going again and the fear of not being able to walk properly,” she said.

Kaileigh has now set up a fundraising page where she is trying to raise money for British mental health charity Mind so that people can get better access to support and help. She has set herself a challenge to take part in a charity trek along Hadrian’s Wall this summer.

“If you’d like to support me in my walk (25 miles on a dodgy leg is quite a lot right), I’d be eternally grateful.”

She said that she has never considered the impact a physical injury could have on her mental health and explained that even now she suffers from severe anxiety.

“Having suffered from anxiety for a number of years, some days it’s easy to just let the negative thoughts take control. I decided enough was enough and that action needed to be taken, which is why I’ve signed up for this charity walk. I want to show that you can overcome any challenge with the right tools and support.”