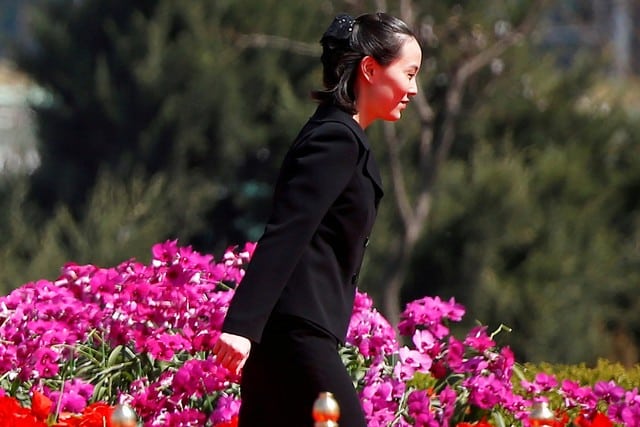 North Korean leader Kim Jong Un’s 28-year-old sister will make her debut on the world stage when she visits South Korea to attend the opening ceremony of the Winter Olympics on Friday, Seoul’s Unification Ministry said.

Pyongyang notified Seoul that Kim Yo Jong would be accompanying Kim Yong Nam, North Korea‘s nominal head of state, along with Choe Hwi, chairman of the National Sports Guidance Committee, and RI Son Gwon, who led inter-Korean talks last week, according to the ministry.

The inclusion of Kim Yo Jong in the delegation is “meaningful” as she is not only the sister of the country’s leader but a senior official at the ruling Workers’ Party, the ministry said in a statement on Wednesday.

But the trip could provide a source of contention between Seoul and Washington, as she was blacklisted last year by the US Treasury Department over human rights abuses and censorship, while Choe is subject to a travel ban under UN Security Council sanctions.

Kim Yo Jong is vice director of the party’s Propaganda and Agitation Department, which handles ideological messaging through the media, arts and culture. Choe had previously worked for the same organisation.

Kim Yo Jong was seen in state media on Tuesday greeting a North Korean art troupe that has since departed for the South to stage performances during the Olympics.

“One of the positives of her visit is that she is someone able to deliver a direct message on behalf of Kim Jong Un”, said Shin Beom-chul, a professor at the Korea National Diplomatic Academy in Seoul.

“What is problematic is that she’s coming with Choe Hwi. … This raises worries that North Korea likely intends to use this Olympics as a propaganda tool rather than a possible opening to meaningful dialogue with South Korea“.

A group of 280 North Koreans arrived in South Korea on Wednesday, one of the largest peacetime crossings of the inter-Korean border, to spur on athletes from the two Koreas at the Winter Olympics starting Friday.

The delegation, made up mostly of a 229-member cheer squad, reached a border checkpoint by bus at around 0030 GMT, Seoul’s Unification Ministry said.

After security controls the group left for the Olympics venue in the alpine resort town of Pyeongchang.

At a rest stop along the way, female members of the cheer squad, all donning black fur caps, red coats and ankle boots, waved and smiled at reporters who were trailing them.

“Hello, hello!” one said, giggling shyly before getting back on her bus.

When one reporter asked whether they were fully prepared, another member quipped: “You’ll know once you see. It’s no fun if I tell you everything now,” according to the South’s Yonhap news agency.

Their arrival comes a day after a North Korean ferry crossed the border carrying a 140-strong orchestra to perform during the Games.

Members of the orchestra were seen leaving the vessel for rehearsals at Gangneung Arts Center early on Wednesday, wearing the same outfits members of the cheer squad were seen in.

The orchestra is scheduled to perform at Gangneung, near Pyeongchang, on Thursday and in Seoul on Sunday.

Aside from the sports officials, the group will be housed at Inje Speedium Hotel & Resort, a four-star luxury hotel roughly two-hours drive from the Olympic venue in Pyeongchang.

Days before the group’s arrival, workers at Inje Speedium had placed banners around the premises welcoming the North Koreans, reading “We are one” and “welcome”.

Police have been deployed to enforce safety at the resort.

The taekwondo performance team is scheduled to hold four shows during their stay in SouthKorea. Two demonstrations will be held near Pyeongchang, while the team will travel to the capital Seoul for the remaining two.

After the art troupe arrived on Tuesday in a ferry, which is also being used as accommodation, North Korea has asked South Korea to provide oil to refuel the vessel, the Unification Ministry said on Wednesday.

Oil is a sensitive item and has taken centre stage in global efforts to curb Pyongyang’s nuclear and missile programmes, with Washington calling for a drastic cut in energy supplies to the isolated country.

North Korea has virtually no domestic oil production, and has traditionally imported its fuel demand from China and Russia.

In December, the UN Security Council unanimously imposed new sanctions on the North, seeking to ban nearly 90 percent of refined petroleum exports to the country by capping them at 500,000 barrels a year.

“There was a request for oil support during our discussions with the North after the ship arrived, and we’re reviewing it now”, ministry spokesman Baik Tae-hyun told a news briefing in Seoul.

Asked about concerns that South Korea was making exceptions to the sanctions, Japanese Chief Cabinet Secretary Yoshihide Suga said it was important not to let up pressure.

“We must not be fooled by North Korea‘s ‘smile diplomacy,” he told a news conference in Tokyo.

NPL ratio drops to 44% amid rising loans in arrears