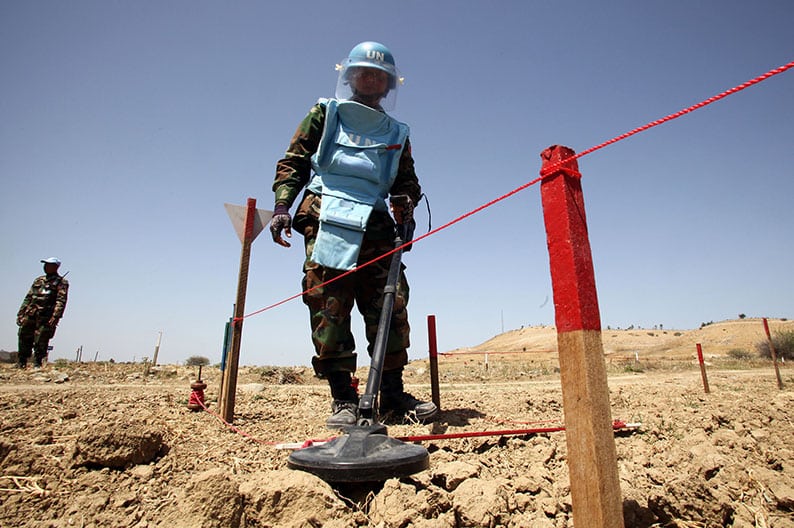 Unficyp remains poised to facilitate a dialogue between the two sides to develop a roadmap to a mine-free Cyprus, should there be the political will to do so, UN spokesman in Cyprus Aleem Siddique has said.

Siddique was asked to comment on the latest Security Council Resolution renewing Unficyp’s mandate which noted with “regret that the sides are withholding access to the remaining minefields in the buffer zone, and that demining in Cyprus must continue.” It also called for a rapid agreement on facilitating the recommencement of demining operations and clearance of the remaining minefields.

According to UN records, Siddique told CNA, approximately 0.19 per cent of the land in the Republic of Cyprus, an estimated area of 1.7 million square metres of land, is suspected to contain landmines or explosive remnants of war (ERW).

Siddique said Unficyp support to humanitarian demining can be split into two phases:  2014 –present and 2004 – 2011.  Since July 2016, the UN Mine Action Service supported humanitarian clearance of 28 historical National Guard minefields in the north of Cyprus.  The details of these locations were given by President Nicos Anastasiades to the leader of the Turkish Cypriot community Mustafa Akinci as part of the package of confidence building measures in May 2015.

Unficyp also cleared the areas surrounding the two future crossing points in Lefka and Dherynia in 2015 and conducted emergency clearance near Mammari in 2014 and 2015, he said.  Between 2004 – 2011, Unficyp and the Undp cleared over 28,000 mines from the buffer zone.  This resulted in the declaration of the divided capital Nicosia as ‘Mine Free’ and the return of farmland within the buffer zone to its owners, he noted.

However, at present, “Unficyp has not received approval from the sides for access to SHAs to undertake new surveys or clearance,” he said, adding that consistent with the recommendations from the Strategic Review, Unficyp maintains a small technical capacity to provide expertise on explosive hazards, conduct planning for future operations, data management, initial non-technical surveys, when access is permitted and to provide risk awareness training for Unficyp troops.

“Unficyp remains poised to support further humanitarian mine action when the political situation allows,” he said.

Asked about obstacles raised in the demining process, Siddique said “as the majority of minefields are located outside the buffer zone, their clearance is contingent upon the specific considerations and sensitivities of the sides.”

Unficyp, he added, “remains poised to support surveys, clearance, and ongoing dialogue with the sides regarding an immediate resumption of mine action.”

On Unficyp’s moves to secure an urgent agreement to allow demining operations to begin, Siddique said: “Unficyp remains poised to facilitate dialogue between the two sides to develop a road map to a mine free Cyprus, should there be the political will to do so.”

Support, he added, includes facilitating the development of phased packages for reciprocal removal and technical oversight.  Previously Unficyp has been uplifted to include a de-mining capability to support clearance where access has been given.

According to figures provided  by Unficyp, 199,783m² of land was released in the north since August 2016 to remove the threat of mines and to facilitate confidence building measures, agricultural activities, and livelihood activities.
Seven anti-tank mines were recovered and destroyed and six mortars were removed.