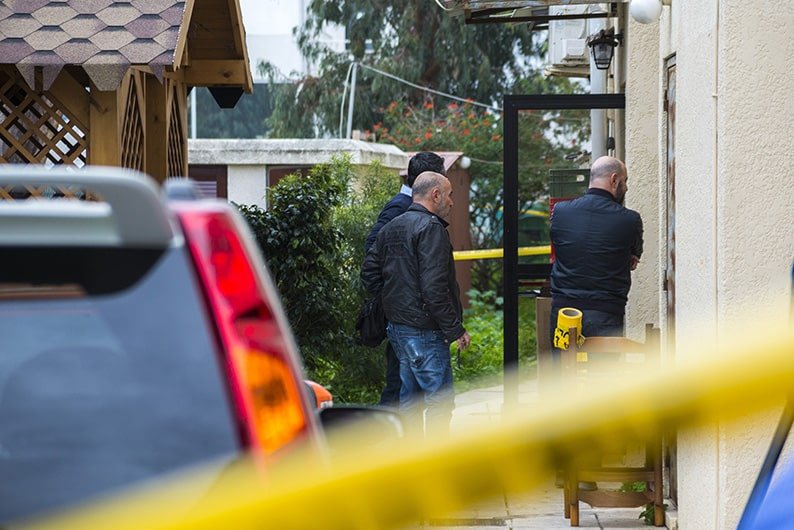 A Limassol court remanded two men in custody for eight days on Friday in connection with the murder of a 47-year-old man the previous day.

Six more people are being sought, police said, including three men believed to be the gunmen.

Police told the court the men, a 24-year-old Georgian and a Russian, 25, who live in Limassol, are suspected of driving the shooters to the tavern where Ernest Leonides was having lunch before he was gunned down.

The court heard the Russian man’s brother, a woman, and two other individuals who had been eating with the victim, were also being sought for questioning.

Leonides, a Greek national of Georgian extraction was gunned down at around 2pm. Police said he suffered four gunshot wounds – one to the head and three to his body.

Footage from a security camera next door showed two men armed with pistols but police were not yet certain if both or more weapons had been discharged.

The men in the video are all wearing carnival-like white masks.

The 25-year-old claimed that he had received a phone call two days ago from a fellow Russian who wanted to rent a car.

They agreed to meet somewhere in Yermasoyia where he drove with the second suspect. There, they met three individuals who got in the vehicle so that they could drive them to a car rental place.

On the way, the suspect claimed, the three men asked to go to the restaurant where the shooting took place, supposedly to eat before they go to the car rental office.

The suspect alleged that, along with the 24-year-old, they went to an adjacent restaurant to wait for them.

At some point they heard gunfire and shouting and when they realized what had happened they decided to flee the scene on foot, leaving their car behind.

However, police said the suspects’ stories did not match as one said they went home on foot while the other said the 25-year-old’s brother picked them up in his car after they phoned him.

Their vehicle was later picked up by a woman whose identity was unknown at the time of the hearing.

Police said they have retrieved a mobile phone, which they believe had been dropped by one of the shooters while trying to get away towards the Dasoudi area.

Leonides, a resident of Larnaca, was known to authorities in connection with past cases involving unlawful possession of firearms and a murder that took place in Pyla in 2016.

Media outlets reported that Leonides was at a time a suspect in connection with the March 2016 assassination of Giorgos Georgiou, aka Chiquito, in the buffer-zone village of Pyla.