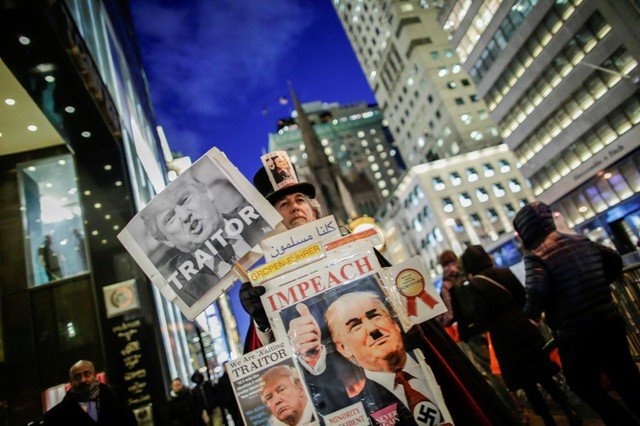 People participate in a protest in front of Trump Tower, in New York City

US President Donald Trump told Israel on Friday that it too would need to make “significant compromises” for peace with the Palestinians, even as they accused one of his Middle East envoys of bogging down diplomacy with what they see as pro-Israel bias.

The Palestinians were outraged by Trump‘s Dec 6 recognition of Jerusalem as the Israeli capital, a move overturning decades of US reticence on the city’s status, and say they are looking at additional world powers as potential mediators.

In an interview with an Israeli newspaper that was excerpted ahead of its full publication on Sunday, Trump described his Jerusalem move as a “high point” of his first year in office.

The language of Trump‘s announcement did not rule out a presence in Jerusalem for the Palestinians, who want the eastern part of the city – captured by Israel in a 1967 war and annexed in a move not recognised internationally – as their own capital.

“I wanted to make clear that Jerusalem is the capital of Israel. Regarding specific borders, I will grant my support to what the two sides agree between themselves,” he told the conservative Israel Hayom daily, in remarks published in Hebrew.

“I think that both sides will have to make significant compromises in order for achieving a peace deal to be possible,” Trump added, without elaborating.

The interview coincided with fresh strains between the Palestinians and the US ambassador to Israel, David Friedman, following the killing by a Palestinian of a Jewish settler.

After the settler was stabbed to death on Monday, Friedman tweeted that he had previously donated an ambulance to the slain man’s community and that he was praying for the next-of-kin, adding: “Palestinian ‘leaders’ have praised the killer.”

That drew a rebuke from the Palestinian administration.

“The American ambassador’s statements make us wonder about his relationship with the occupation,” Nabil Abu Rdainah, a spokesman for President Mahmoud Abbas, said in a statement. “Is he representing America or Israel?”

“Friedman’s recommendations and advice, which do not aim to achieve a just peace on the basis of international legitimacy, are what led to this crisis in American-Palestinian relations,” Abu Rdainah said.

Friedman, among the top Trump advisers who promoted the Jerusalem move, is a former contributor to settler causes.

In addition to East Jerusalem, Palestinians want the occupied West Bank for a future state and see Israel’s Jewish settlements there as a major obstacle. Israel disputes this.

Most world powers deem the settlements illegal, but the Trump administration has taken a softer tack.

A liberal Israeli newspaper, Haaretz, published a column criticising Friedman’s stance and dubbing the settlement he had supported as “a mountain of curses” – a play on its Hebrew name, Har Bracha, which means “Mount Blessing”.

The ambassador took the unusual step of firing back at the daily in another tweet on Friday: “Four young children are sitting shiva (Jewish mourning rite) for their murdered father …. Have they (Haaretz) no decency?”

Haaretz’s publisher, Amos Shocken, responded over the platform with a critique that echoed Palestinian complaints.

“As long as the policy of Israel that your Government and yourself support is obstructing (the) peace process … there will be more Shivas,” Shocken tweeted.