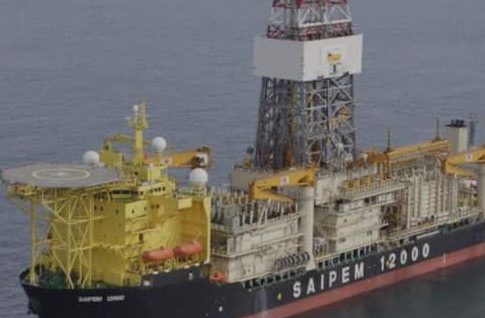 CYPRUS was maintaining an open line of communication with Italy on Saturday after energy giant ENI’s drillship Saipem 12000 was given instructions to stay put overnight while on its way to a drill site in Block 3 of the island’s exclusive economic zone (EEZ) due to harassment by Turkish warships.

Meanwhile the Turkish Cypriot ‘foreign ministry’ said it would not accept the extension of ENI’s activities into Block 3, which it claims for the ‘TRNC’ and accused the Greek Cypriots of raising tensions in the region.

The Saipem was still at a complete standstill at the time of going to press on Saturday according to marinetraffic.com, a live ship-monitoring website. Various reports said there were anything from three to six Turkish warships in close proximity to the platform.

In the meantime, it is understood that in addition to Nicosia and Rome working to resolve the issue, other diplomatic back channels have been opened with the EU and US.

The Saipem 12000, which stopped some 15 nautical miles from its target location within Block 3, named Soupia or Cuttlefish, was some 70km off the coast of Cape Greco, on the southeastern corner of the island. The drillship had travelled from Block 6 of the south-west coast on Friday a day after ENI announced promising gas finds within that block, named Calypso.

Foreign Minister Ioanns Kasoulides told public broadcaster Cybc on Saturday that the Turkish vessels that had harassed Saipem 1200 had forced the captain to manoeuvre out of their way. According to reports the Turkish vessels ordered the drillship to change course.

Kasoulides sad the ENI drillship remained in the same spot overnight on Friday and that the Turkish ships were still conducting illegal exercises in the Cypriot EEZ on Saturday. New reports later said the Saipem would reach the Soupia field later in the night but it was still stationary at 10pm.

“Italy’s and Cyprus’ foreign ministries are in constant contact,” Kasoulides said, adding that the government was also in contact with ENI’s main offices in Rome about the situation.

He added that when the harassment began, ENI had told the captain of the Saipem not to turn back and to stay in place to await further instructions as to when they could move towards the drill site. The solution to the issue would come from Rome and the Italian government, the outgoing foreign minister said.

Kasoulides said the more Turkey acted this way, the “more it leaves itself exposed” internationally.  He also believes such incidents would probably continue. “In many countries in the world where oil exploration is being carried out, such incidents happen often,” he said.

He added that he was certain the Italian government would protect its interests.

On Friday, citing government sources, CyBC said that similar tactics had been carried out in the past, but Friday’s harassment had been stepped up a notch with three vessels circling the Saipem.

A statement from the Turkish Cypriot ‘foreign ministry’ in the north on Saturday said they would not accept the extension of ENI’s activities into Block 3.

“On our part, it is an action that is unacceptable.  Despite all our warnings, it seems the Greek Cypriot leadership insists on increasing the tension in the area,” the statement said.

It added that measures were taken by the Greek Cypriot side that did not take into account the rights of the Turkish Cypriots, and that as the ‘TRNC’ they would not hesitate to take such actions [as were deemed necessary] in co-operation with the Republic of Turkey.

According to the statement, the Greek Cypriots have ignored all the warnings and appeals of the Turkish Cypriot side to co-operate on the issue.

Despite the fact that the wealth could be used as a method of co-operation between both sides in Cyprus, and others in the area, the ‘foreign affairs ministry’ noted, “the Greek Cypriot leadership has created the fait accompli it wanted, and has turned the natural wealth into a threat and source of tension in the area.”

It added that the Turkish Cypriot proposals had been constructive as far as the fair distribution of the natural wealth was concerned and that those proposals were the only reason the Greek Cypriot side was against cooperating.

It said that taking into account ‘international agreements’ signed in the past, the ‘foreign affairs ministry’ would take more concrete steps soon.

On February 6 Turkish authorities issued a notice to mariners (FA78-0198), reserving for ‘military training’ a vast area encompassing virtually the whole of the island’s southern waters.

The reserved area covers Cyprus’ block 3 and the Turkish Navtex will be in force on February 18 – at the same time that the drillship leased by ENI was to begin operating in the area.

In response, Cyprus issued its own Navtex (NR 074/18) advising seafarers that the Turkish notice constitutes ‘unauthorised and illegal activity in the exclusive economic zone, the continental shelf and the search and rescue region of the Republic of Cyprus’.

“This action is illegal, constitutes a violation of international law, affects maritime safety procedures and is also a criminal offence under the laws of the Republic of Cyprus.”

It read: “The ‘Cyprus’ mentioned in Larnaca Navwarn NR 074/18 is not the original partnership state established in 1960.”

The playful manner of classical music