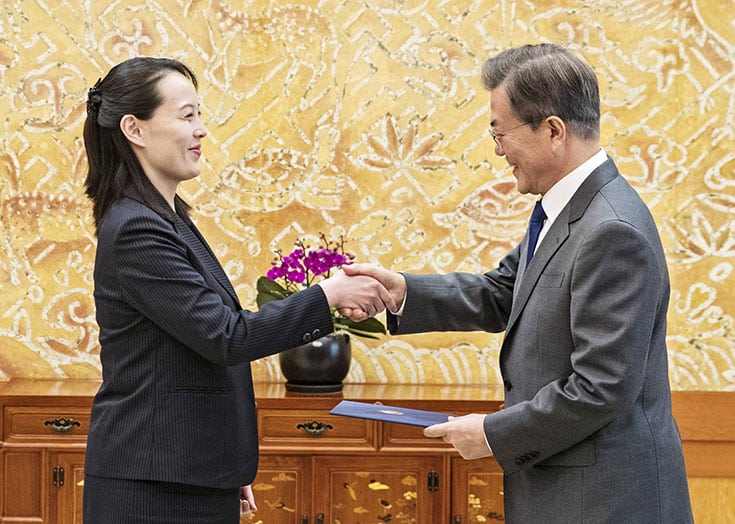 Any meeting would represent a diplomatic coup for Moon, who swept to power last year on a policy of engaging more with the reclusive North.

The recent detente, anchored by South Korea‘s hosting of the Winter Olympic Games that began on Friday, came despite an acceleration in the North‘s weapons programmes last year and pressure from Seoul’s allies in Washington.

The personal invitation from Kim was delivered by his younger sister, Kim Yo Jong, during talks and a lunch Moon hosted at the presidential Blue House in Seoul.

“We would like to see you at an early date in Pyongyang”, Kim Yo Jong told Moon during the lunch, according to another Blue House official.

The prospect of two-way talks between the Koreas, however, may not be welcomed by the United States.

Washington has pursued a strategy of exerting maximum pressure on Pyongyang through tough sanctions and harsh rhetoric, demanding it give up its pursuit of nuclear weapons.

“This is the strongest action yet by North Korea to drive a wedge between the South and the United States,” said Kim Sung-han, a former South Korean vice foreign minister and now a professor at Korea University in Seoul.

Moon asked the North Korean delegation during Saturday’s meeting to engage in dialogue with Washington “at an early date”, the Blue House said.

A visit by Moon to the North would enable the first summit between leaders from the two Koreas since 2007.

Pyongyang conducted its largest nuclear test last year and said it had developed a missile capable of carrying a warhead to the United States.

US President Donald Trump and the North Korean leadership traded insults as tensions rose, with Trump repeatedly dismissing the prospect or value of talks with North Korea.

US Vice President Mike Pence, also in South Korea for the Olympics, has said the United States and South Korea were closely aligned in their approach to dealing with North Korea.

“I am very confident, as President Trump is, that President Moon will continue to stand strongly with us in our extreme-pressure campaign,” Pence told NBC in an interview on Friday, maintaining all options were open to deal with the crisis.

“Make no mistake about it, the United States of America has viable military options to deal with a nuclear threat from North Korea but, that being said, we hope for a better path,” he said.

North and South Korea are technically still at war after their 1950-53 conflict ended in a truce rather than a peace treaty. The United States fought with South Korea and maintains tens of thousands of troops and an “ironclad” agreement to protect its ally.

North Korea has spent years developing its military, saying it needs to protect itself from US aggression.

Moon hoped to use the Olympics to ease tensions and North Korea agreed to send high-profile officials as well as athletes.

Kim Yo Jong arrived in South Korea on Friday with Kim Yong Nam, the North‘s nominal head of state, for the opening ceremony in the alpine town of Pyeongchang.

Pence also attended the Games opening ceremony but had no contact with the North Korean delegation.

Kim Yo Jong, 28, is the first member of the ruling Kim family bearing the bloodline of the sacred Mount Paektu, a centrepiece of the North‘s idolisation and propaganda campaign, to cross the border into the South since the 1950-53 Korean War.

The delegations shared a lunch of dried pollack dumpling soup, a regional speciality of the only divided province on the Korean peninsula, and soju, a spirit popular on both sides of the heavily militarised border.

Moon and Kim Yong Nam planned to return to the Games venue to watch the joint Korean women’s ice hockey team – the first ever combined team at the Olympics – take on Switzerland, the Blue House said.