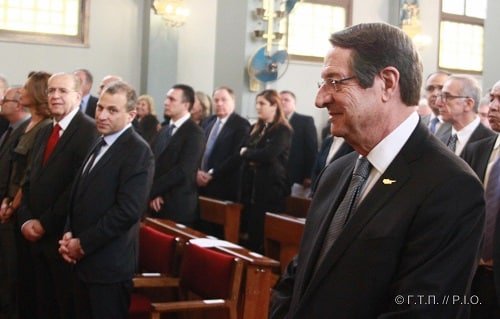 President Nicos Anastasiades said on Sunday that regional cooperation agreements Cyprus signed could establish an informal forum which could evolve into an important lever for security and cooperation in the region.

He was addressing the Maronite community following a church service in honour of Saint Maroun in Nicosia, in the presence of Lebanon’s Foreign Affairs Minister Gebran Bassil. The presence of the Lebanese minister, Anastasiades said, was a proof of the “excellent relations between Cyprus and Lebanon and of the important role the Maronite community plays in further enhancing and developing them”.

Anastasiades assured the island’s Maronite community that he fully adopts and promotes at all times their longstanding requests which have to do with the return of all four Maronite villages which are in the occupied areas in the north to their rightful residents.

He expressed hope that “the Turkish Cypriot side and Turkey would finally be willing to cooperate through mutual respect, constructively to end occupation and reunify our country in the context of a possible new Conference on Cyprus”.

Security and stability constitute a key factor of prosperity in a country, Anastasiades said. “This is why our efforts are not limited to the bi-communal negotiating table”.

Prudent steps in recent years, he said, “have made Cyprus, despite its small size,  a credible country of stability, an actor of regional policy, social and economic cooperation, a contributor of security in the region, by way of undertaking a truthful effort to overcome differences and to establish new bridges of friendship and cooperation with all the countries of our region”.

He referred to Cyprus’ initiative together with Greece to form trilateral cooperation agreements with Israel, Egypt, Lebanon, Jordan and Palestine.

In this context specific projects and actions have been launched, always in respect of international law, aiming to a convergence to the common benefit of all participants, without been aimed in any case against the interests of other countries, he said.

“Our key goal is to get together all our alliances in a regional informal forum which would soon evolve into an important security and cooperation lever for the entire region,” Anastasiades said.