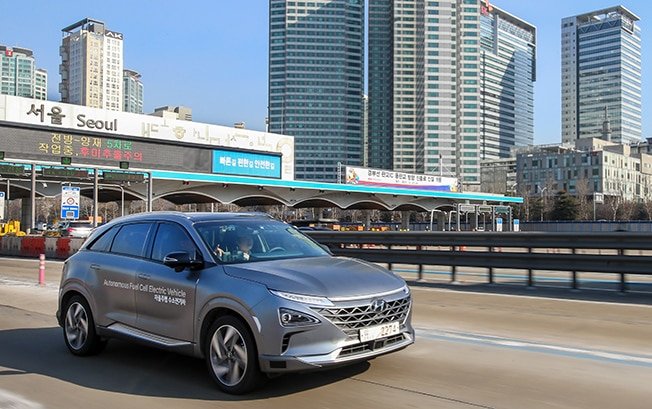 A fleet of Hyundai Motor Company’s next generation fuel cell electric vehicles have succeeded in completing a self-driven 118-mile journey from Seoul to Pyeongchang.

This is the first time ever that level 4 autonomous driving has been achieved with fuel cell electric vehicles.

Until now, autonomous driving has been demonstrated only on selected sections of Korean domestic roads and at a limited speed: this is the first time autonomous vehicles have operated on public highways at 110 km/h, the maximum speed allowed by law on Korean highways.

Three Hyundai vehicles completed the journey, all based on NEXO, Hyundai’s next-generation fuel cell electric vehicle which is scheduled to be released in Korea next month. All vehicles were equipped with level 4 self-driving technology, as defined by the SAE international standards, and equipped with 5G network technology.

The demonstration took place in Seoul on Feb 2, with the ‘CRUISE’ and ‘SET’ buttons being pressed on the autonomous-driving steering wheel of each vehicle, at which point the cars immediately switched to self-driving mode and began the journey to Pyeongchang. Entering the highway, the vehicles moved in response to the natural flow of traffic, executed lane changes, overtaking manoeuvres and navigated toll gates using Hi-pass, South-Korea’s wireless expressway payment system.

Building on the company’s successful demonstration in Las Vegas during the Consumer Electronics Show (CES) early last year, the cars feature a number of advanced technologies that enable them to recognise surrounding vehicles more accurately and make better judgements at junctions, as well as navigating through toll gates by accurately calculating the gate’s width and position.

The vehicles were also able to pinpoint their position on a map by using external sensors fitted for situations when the GPS signal was interrupted, such as going through underground tunnels.

Hyundai has conducted hundreds of thousands of miles of highway test drives, which has enabled the accumulation of data to enhance the performance of its self-driving vehicles. Jinwoo Lee, Head of the Intelligent Safety Technology Centre at Hyundai Motor Group said: “Hyundai’s philosophy for developing autonomous driving technology is to provide the highest level of safety combined with a high standard of convenience that our customers expect.”

The exterior and interior of the self-driving vehicles used for this demonstration look similar to Hyundai’s other mass-produced models but are installed with additional cameras and LIDARs (Light Detection and Ranging). Adding a small number of sensors to mass produced vehicles has enabled fully autonomous driving technology, bringing Hyundai closer to the commercialisation of self-driving technology.

During autonomous driving, a high volume of data is processed by the vehicle’s on board systems, making for large power consumption. A fuel cell electric vehicle is able to produce electricity to meet this consumption, as well as powering the vehicle’s drive systems, through a reaction between hydrogen and oxygen in the fuel cell stack, with the only tail pipe emission being water vapour.

The vehicle used in this test was NEXO, Hyundai’s next generation fuel cell electric vehicle, which has a target range of 500 miles (NEDC) on a single charge of hydrogen and takes only five minutes to refuel.

Passengers in the rear seats can use ‘Home Connect,’ a car-to-home technology which enables the user to access and control ‘Internet of Things’ (IoT) devices installed in their smart home. They can view home camera images in real-time, control the lighting, remote door lock, control television, and even manage home energy systems.

‘Assistant Chat’ is a technology that allows users to ask questions to a Chat Bot with simple voice commands and receive answers in the form of text or images.

‘Wellness Care’ can monitor health information of passengers seated in the rear of the vehicle, such as their stress level, heart rate, and mood state. They can also access relaxing therapeutic services and connect with a health consultant through a real-time video call.
The vehicle also provides ‘Noise-Away’ cabin noise reduction technology and ‘Mood Care’ which provides rear door mood lighting when the music player or ‘Wellness Care’ is active.

Lastly, users can receive real-time traffic information notifications in multiple languages, including Korean, English and Chinese.
Hyundai Motor Group is preparing for the commercialisation of the SAE standard Level 4 compliant autonomous-driving system in smart cities by 2021. To this end, the company announced plans last month at CES 2018 to jointly develop self- driving technology with Aurora Innovation; a US based autonomous driving start-up. Hyundai plans to commercialise the technology for fully autonomous driving by 2030.

Diko: can the ‘party of strife’ weather its latest drama?