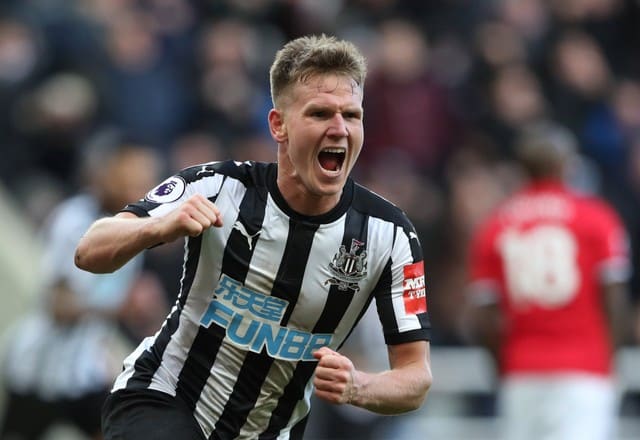 NEWCASTLE UNITED 1 MANCHESTER UNITED 0
Matt Ritchie lifted the gloom on Tyneside with the winner in Newcastle United’s crucial 1-0 victory over Manchester United in the Premier League on Sunday — their first three-point haul at home since October.

Newcastle had fallen into the bottom three before kickoff after Huddersfield Town’s earlier win over Bournemouth, but they responded with a vibrant display capped by Ritchie’s 65th minute effort.

Ritchie was released into space by Dwight Gayle’s flick and he buried a low shot past David de Gea.

Gayle was also unlucky not to be awarded a first-half penalty but Man United were guilty of wasteful finishing with Anthony Martial and Alexis Sanchez the chief culprits.

The visitors almost grabbed a stoppage-time equaliser but debutant goalkeeper Martin Dubravka made a marvellous low save after the ball deflected off one of his own players from close range.

Newcastle’s first win over United for five years lifted them from 18th to 13th while Jose Mourinho’s second-placed side are now 16 points behind local rivals Manchester City and looking over their shoulders at the teams behind them.

Alex Pritchard fired Huddersfield in front after seven minutes and although Junior Stanislas levelled, the hosts were ahead again before the break thanks to Steve Mounie’s 27th-minute header from Aaron Mooy’s delivery.

Beninese striker Mounie’s shot was deflected in by Steve Cook after 66 minutes — Cook being attributed with an own goal.

Rajiv van la Parra tucked away a stoppage time penalty to complete a satisfying afternoon for David Wagner’s side.

Victory did come at a cost for Huddersfield with Australian midfielder Mooy leaving the pitch on a stretcher in the second half after a clash of knees.

The Premier League basement has taken on a revolving door feel with so many clubs involved in the relegation battle.

Huddersfield began their first Premier League season impressively but have struggled to replicate their early verve and had not won for eight games before Sunday.

“We needed a few minutes at the start where Bournemouth were strong but after that we played superb football. It was one of the performances of the season,” manager Wagner said.

“It was our idea to press the opponent high up the pitch and win the ball. It was a fantastic afternoon for us.”

While Bournemouth look relatively safe after recent wins against Arsenal and Chelsea in a seven-match unbeaten streak, manager Eddie Howe knows they cannot afford any loss of form.

“We should look as hungry if not hungrier than them, that’s no excuse for us. Every game should be treated as a cup final,” Howe, whose side are four points ahead of Huddersfield, said.

Pritchard swept in Mounie’s pass after seven minutes for his first goal since joining the club but the home jitters returned when Stanislas took a touch before slotting an equaliser.

Mounie raised the mood and wanted the ball for what he thought was a hat-trick penalty in stoppage time after Pritchard was bundled over in the area. Instead Van la Parra took responsibility to stroke home.

“The most important was the win, even if I wanted to take the penalty. I leave it for Rajiv (van la Parra),” he said.

Bournemouth are the seventh team Huddersfield have beaten in all four tiers of English league football, along with Bradford, Brentford, Bury, Grimsby, Portsmouth and Watford.