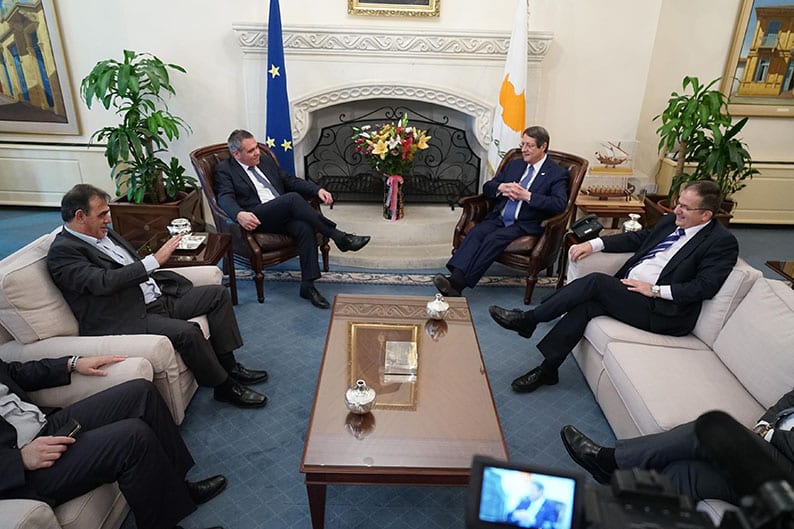 President Anastasides with representatives of SEK union on Tuesday

THE ELECTIONS may be over but now the winning candidate will have to deal with the consequences of a campaign dominated by populist irresponsibility. On Tuesday, President Anastasiades met Andreas Matsas, general secretary of the trade unions federation Sek, and, according to an official announcement, discussed the framework within which, the conditions that would allow the implementation of his election promises, would be created.

Payback time had arrived, just 48 hours after the election. Sek would not have publicly declared its support for Anastasiades without securing a host of pledges from him in exchange. The union boss went to the presidential palace to make sure Anastasiades would not forget his promises. Matsas said that the “structures of social dialogue, in the next five years, would work, to a larger extent, to the benefit of the workers and everything they were entitled to”. Sek would work to put right the injustices perpetrated against the workers, Matsas said.

The dialogue about the setting of the minimum wage would begin soon, said Matsas. This idea was brought to the campaign by Akel’s candidate, while Anastasiades decided it was a vote winner and adopted a slightly amended version. He announced there would be a different minimum wage for every sector, dependent on the sector’s robustness, rather than a universal one, to make this command economy measure seem a bit less irrational.

The government and the unions will now determine wages instead of the forces of demand and supply, reinforcing the view that the overwhelming majority of our politicians, including Anastasiades, have an Akel mind-set. The irony is that people voted for Anastasiades, primarily because they did not trust Akel’s candidate to manage the economy, and he will introduce a measure, setting wages by law, that only the communist party Central Committee would have thought of.

What will he achieve with this measure apart from ingratiating himself to the unions? First, the government’s efforts to reduce unemployment will be dealt a blow, because businesses will be reluctant to hire new staff when their wage bill has increased by law. Second, the measure would discourage the opening of new small businesses that will be wary of having to pay the government-set minimum wage. Third, it would encourage some employers to hire workers on a part-time basis. Fourth, there may be a surge of undeclared work, which would mean workers would have few, if any rights. Fifth, businesses that are in trouble and struggling might close down if their wage bill increases.

Another question arises: who will determine the minimum wage in each sector of the economy? The labour ministry civil servants that invariably side with the unions in every industrial dispute and have no interest about the difficulties facing businesses? What will happen will be similar to the practices followed for collective agreements – the minimum wage (entry level) will be acceptable to the bigger, more robust companies of the sector, while putting the squeeze on smaller entities in a less healthy position.

The absurd thing is that all the parties, including the president’s, Disy, pay lip service to supporting small to medium enterprises (SME), which, they argue, are the backbone of the economy. Many of these businesses are struggling to meet their loan repayments and would have the added pressure of higher labour costs to deal with, which would push them deeper into trouble and reduce their prospects of survival.

What is worrying is that neither the Chamber of Commerce (Keve) nor the Federation of Employers and Industrialists (Oev) have taken a public stand about the president’s misguided plan. It would not be a surprise if they have decided to take part in the consultations for determining the minimum wages on the pretext that they would ensure these were low. This is not really the issue and these organisations that are supposedly the champions of the market economy should oppose state regulation of wages on principle. In a market economy, wages are determined by demand and supply, not by the government. A dynamic economy cannot thrive on labour market rigidities and distortions imposed by the state.

These rigidities, which were removed by the recession, are being brought back gradually, with the support of a populist president. At the beginning of the year a watered-down version of economically indefensible Cost of Living Allowance was re-introduced, but we are sure in a year or two the government will agree to restore it to its old destructive form. The minimum wage might also be set at a relatively low level, but how long will it take for the union to demand that it is increased? The Sek boss made clear what the union objectives were and Anastasiades, acting like an Akel president, is helping achieve them, regardless of the harm they will cause the economy.

Tales from the Coffeeshop: Our Cyprus: purges, Dikheads and the spoils of power

Diko: can the ‘party of strife’ weather its latest drama?