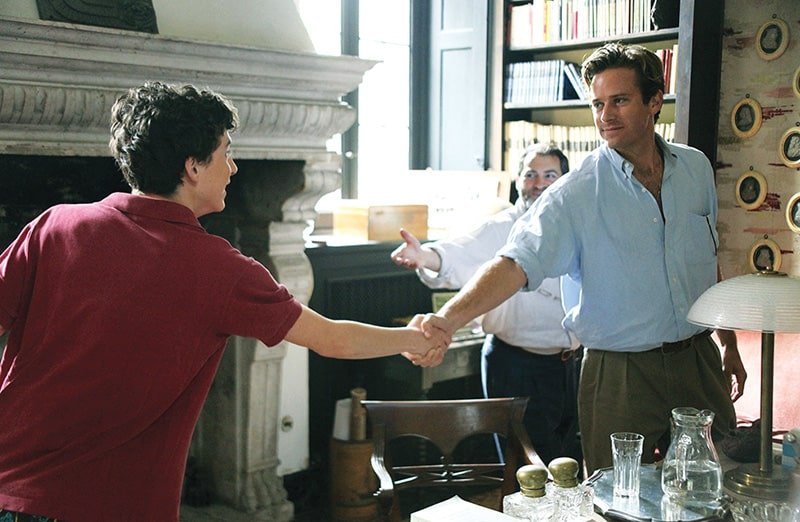 I adore Call Me By Your Name, yet it’s easy to see the case against it. The houses are too big, and the settings are too pretty. Everyone is handsome, smart and talented. Activists may accuse it of playing down the gay angle – indeed it’s unclear if the two protagonists are gay, beyond this one special ‘friendship’ – to become more acceptable to straight viewers. At the other end of the spectrum, some might say it extends a pass to a gay romance which it wouldn’t if Elio (Timothée Chalamet) were female. Elio, after all, is 17, Oliver (Armie Hammer) is a good few years older; a film about a man having a sexual relationship with a 17-year-old girl might be termed creepy and unsavoury, in the current climate.

So much for the naysayers. That just leaves the movie, which flags a bit in the second half but is mostly miraculous – a tonic, a dream, brimming with life force and joie de vivre. The time is 1983, a time of cassette tapes and cigarettes, ‘Words’ by FR David, the death of Luis Bunuel and the rise of Bettino Craxi. The place is northern Italy, specifically a villa in Lombardy where the Perlmans spend their summers and Christmases; Mr Perlman (Michael Stuhlbarg) is a professor – of history, or perhaps archaeology – who every year brings a graduate student to help him over the summer. This year it’s Oliver, who impresses his hosts with his classical knowledge but also amuses them with his Americanisms and voracious appetites.

Oliver attacks his soft-boiled egg at breakfast like a hungry animal. He downs a glass of apricot juice in one. (The house comes with its own orchard; later on, a peach appears in a featured role.) He reaches out, bonding with the old “ragazzi” in the village coffee shop, much to Elio’s surprise and delight. Elio, it’s clear, lives in a bubble – a pampered only child and musical prodigy, happy to spend the summer reading books, swimming in the river and hanging out with other teenage visitors. Oliver fascinates him, somewhat annoys him, and increasingly arouses him. “Are you saying what I think you’re saying?” asks the older man, both wearing shades – as if to mask their feelings – as they sit around the WWI monument in the village square.

History is everywhere, not just WWI but also ancient history (including Greece, where sexual friendships between men and boys were of course not uncommon). That’s one way in which Call Me By Your Name differs from most cinematic love stories: it’s not about obsession so much as experience – an experience that becomes part of life, part of everything else (that’s to say, part of history). Director Luca Guadagnino gives the film a scurrying physical energy, underlined by a jazzy piano score; people are forever walking, swimming, biking, dancing, eating, shifting from A to B out of sheer exuberance. Elio does become obsessed but it’s one of many obsessions, part of a free-floating something – and even in the final act, when Oliver takes over his life, the affair has a clear expiration date. Will you leave me this shirt “when you go?” asks the boy, moments after they first make love; “Aren’t you sick of me yet?” jokes Oliver later. The film does something quite unique, evoking the prodigious hunger for life of a young man (or a youthful spirit) – and making its romance a part of that, rather than vice versa.

The other way in which Call Me By Your Name differs from most same-sex love stories (especially those set in the past, like the recent Carol) is in being almost guilt-free, culminating in a very moving father-son speech which I won’t spoil – except to say that it also (like the rest of the film) takes the long view, placing love in the context of life as a whole: it’s important to love, to feel, even if we grieve when it’s over. We cry, as in the film’s superb final shot – then perhaps we sigh, and grow up, and preserve the memory of love like the sensual lines on those ancient Greek statues.

None of this really expresses what makes the movie so special – which is partly the sense of a gilded, half-remembered past, partly the sense of a cultured, cosmopolitan family, partly a strong sense of Nature (birdsong, the buzz of crickets, a moonlit tree against the inky black of night), partly a sense of yearning, above all 20-year-old, New York-born actor Timothée Chalamet who imbues every second of his performance with inner life. Elio is thoughtful when he spots the Star of David around Oliver’s neck (the Perlmans are “Jews of discretion”, as Mum likes to say), mischievous when flirting – “Am I offending you?” – a vulnerable kid when wrapping his arms around Oliver, a teenage pest when family friends come to visit. The case against Call Me By Your Name may be strong, but there’s no denying this performance or this wise, life-loving movie. “Our hearts, and our bodies, are given to us only once.” True.

Mostly in English, with some French and Italian dialogue.

Love is in the air at Red Music Stage

Minister of education to sign MoU during Tbilisi visit