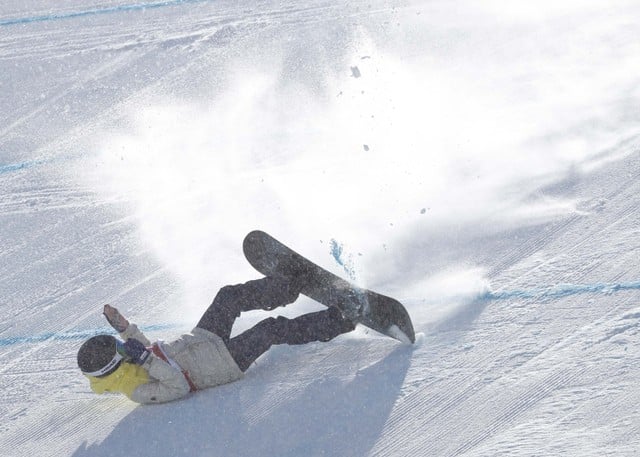 Icy winds tore through the mountains at the Pyeongchang Olympics on Monday, wreaking havoc at a snowboard final, forcing the postponement of the Alpine skiing for a second successive day, and raising questions about athlete safety.

Competitors, officials and a few brave fans made their way around the Olympic venues wrapped in layers of scarves, hats and thick coats as the biting wind added a significant chill factor to temperatures already down around minus 20 degrees Celsius.

At the Yongpyong resort, winds in excess of 70 kilometres per hour prevented the Alpine skiing competition from getting underway for the second day in a row with the women’s giant slalom joining the men’s downhill in being moved to Thursday.

The gusts were not as strong at the Phoenix Snow Park but caused farcical conditions for the women’s slopestyle final with snowboarders who had spent four years perfecting their routines blown off the hill by crosswinds.

Qualification was cancelled entirely on Sunday due to the weather but the final got underway after an hour’s delay on Monday only for 20 of the 25 competitors to fall in the opening run.

American Jamie Anderson laid down the best first run to retain the title she won in Sochi four years ago but pre-event favourite Anna Gasser, who failed to land either of her runs, said the final should have been postponed.

“We tried to speak to officials but the Olympics put us under pressure to do it today,” the Austrian told reporters.

“They said we had to do it today.”

Anderson’s compatriot Hailey Langland, who fell on the first run but put in a solid second effort to finish sixth, disagreed.

“We are snowboarders and should be able to deal with it,” said the 17-year-old. “The girls on the podium showed that and that is why they are up there.”

The International Ski Federation (FIS) said that although the conditions made the competition challenging, “the nature of outdoor sports also requires adapting to the elements”.

“The first priority for FIS is the safety of the athletes and FIS would never stage a competition if this could not be assured,” it said in a statement.

“The FIS Jury monitored the weather conditions closely throughout the day, including consulting with the coaches, and considered it was within the boundaries to stage the competition safely.”

Australian snowboarder Tess Coady, however, was left contemplating a lengthy period of recuperation on Monday after suffering a serious knee injury in practice on Sunday.

“Got picked up in the wind on the bottom jump in practice and my ACL was not a big fan!” she posted on Instagram.

“I don’t think anyone can say for sure (high winds) caused this accident but I think it certainly needs to be reviewed,” he said on Monday.

Sung Baik-you, spokesman for the local organising committee POCOG, said the safety of the athletes was of the “utmost importance” in any discussions about re-scheduling.

Alpine skiing race directors have had contingency plans in place for several days after receiving the forecasts of the high winds and on Monday appeared resigned to two more days of battling the elements.

“We all know with big wind gusts it’s not possible to put on speed races.”

The women’s giant slalom, which will take place at Yongpyong, was moved to Thursday with an earlier start time to allow a window for the men’s downhill, which was postponed on Sunday.

Running races on separate mountains on the same day is hardly ideal, however, especially when one, the men’s downhill, is the marquee event of Alpine skiing at the Games.

The men’s Super G has been switched to Friday, previously a rest day, to make room for the downhill.

Disruption to Alpine skiing competitions is not unusual, however, and it is a rare Games where some re-jigging of the schedule is not necessary.

The Alpine skiing at the 1998 Games in Nagano was heavily disrupted by heavy snow and rain and the men’s downhill was rescheduled three times.

The schedule for the 2010 Vancouver Olympics was similarly impacted by poor course conditions and bad weather at Whistler with the men’s downhill postponed by two days.

“Nagano held the downhill five minutes before the closing ceremony. We have reserved space so this is a touch premature.”