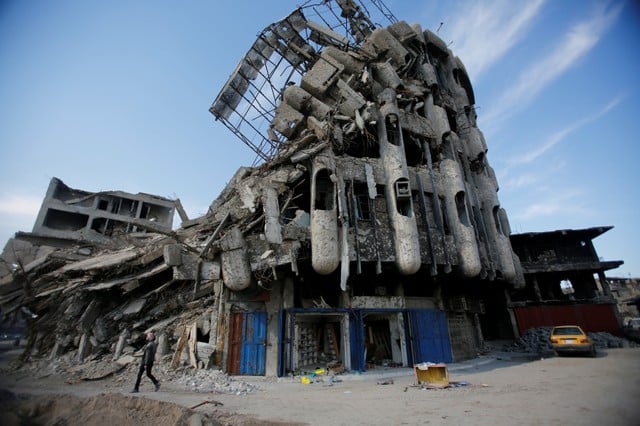 Destroyed building from previous clashes are seen in Mosul

Donors and investors have gathered in Kuwait this week to discuss efforts to rebuild Iraq’s economy and infrastructure as it emerges from a devastating conflict with the hardline militants who seized almost a third of the country.

Iraq declared victory over Islamic State in December, having taken back all the territory captured by the militants in 2014 and 2015.

About $22 billion will be required in the short term and another $66bn in the medium term, the director-general of the country’s planning ministry, Qusay Adulfattah, told the conference, without indicating any time frame.

“Rebuilding Iraq is restoring hope to Iraq, and restoring the stability of Iraq is stabilising the states of the region and the world,” said Planning Minister Salman al-Jumaili.

Iraq has published a list of some 157 projects for which it is seeking private investments at the conference, which some 1,900 delegates representing foreign governments, private firms and NGOs have registered to attend.

The projects include rebuilding destroyed facilities such as Mosul airport and new investments to diversify the economy away from oil sales, by developing transport, agriculture and industries based on the nation’s energy wealth, including petrochemicals and oil refining.

Rebuilding homes, hospitals, schools, roads, businesses and telecommunications will be key to providing jobs for the young, ending the displacement of hundreds of thousands of people and putting an end to decades of political and sectarian violence.

Around 138,000 housing units have been damaged and half of them are completely destroyed, Mustafa al-Hiti, who runs Iraq’s Reconstruction Fund for Areas Affected by Terroristic Operations, told the conference.

About 2.5 million Iraqis remain displaced by the fighting, he added.

Nations could help by acting as guarantors with lenders, allowing Iraq to take out soft loans to fund infrastructure projects, Mahdi al-Alaq, the Secretary-General of Iraq’s Council of Ministers, told the conference, adding that there were preliminary indications that some states would do so.

But US officials said the United States, which leads an international coalition that provided Iraq with key air support in the fight against Islamic State, does not plan to pledge any money at the Kuwait conference.

“If the international community doesn’t help the government of Iraq to stabilise these areas (devastated by the war) the gains against Daesh could be at risk,” she said, using the Arabic acronym for Islamic State.

Non-governmental organisations pledged $330m in humanitarian aid to Iraq at a parallel NGO conference on the sidelines of the main reconstruction one, Kuwait’s state news agency Kuna reported.

Baghdad has said it is determined to tackle the red tape and corruption that hamper investment. Iraq is the 10th most corrupt country in the world, according to Transparency International.

Iraq reopened to foreign investment after the 2003 invasion but the vast majority of the billions of dollars invested went to increasing its oil and natural gas production.

Iraq has been dogged for decades by violence and instability. It was at war with Iran for most of the 1980s and its invasion of Kuwait in 1990 led to war with a US-led coalition and more than a decade of international sanctions.

A US-led invasion toppled Saddam Hussein in 2003 and was followed by years of insurgency, sectarian bloodletting between Sunnis and Shi’ites, as well as ethnic tensions between the Arabs and Kurds, all before Islamic State emerged in 2014.

Government workers up 1.1% in January

‘People would die for Olympic medal, I nearly did’