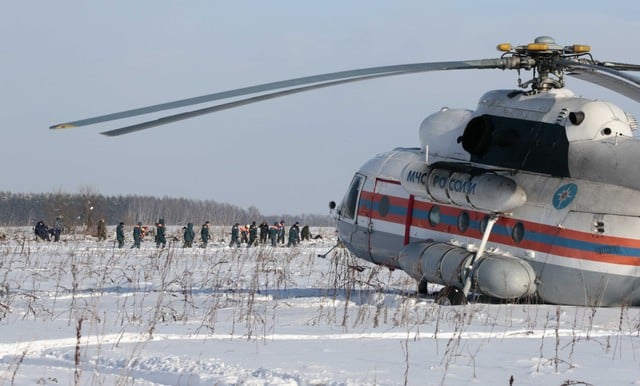 Emergency workers in Russia searched snow-covered fields outside Moscow on Monday, looking for body fragments and clues after a fatal plane crash a day earlier killed all 71 people on board.

President Vladimir Putin has ordered a special commission to investigate what caused the AN-148 plane operated by Saratov Airlines to crash outside Moscow shortly after taking off for the city of Orsk about 1,500km south-east of the capital.

Among the possible causes investigators are looking into are weather, human error and the plane’s technical condition. The crew did not send any distress signals.

Experts plan to study the plane’s two flight recorders, which were recovered, as well as plane fragments. Footage from a CCTV camera that captured some of what happened was posted online on Monday. It showed what looked like a large ball of fire streaking through the sky.

Investigators, who have opened a criminal case into the tragedy, said in a statement however that the plane had been in one piece when it plummeted towards the ground and not on fire. An explosion had occurred only after it crashed, they said.

Debris and human remains were spread over a radius of one km (less than a mile) around the crash site and recovery teams had found over 200 body fragments so far, the RIA news agency reported, saying the search could carry on for a week.

Officials from Russia’s Emergency Situations Ministry told a meeting broadcast on state TV on Monday that DNA tests were being organised with the relatives of those killed to try to identify body fragments.

The plane, manufactured in 2010, had been carrying 65 passengers and six crew. The passenger list showed many young people were on board, including a five-year-old girl.

“We believed until the very end yesterday that at least someone would survive,” said a distraught Ekaterina Zakladnaya, 20, whose mother Natalia was killed in the crash.

“We phoned the airports and barely managed to get through and then they published the lists and mummy was second from the bottom.”

The plane’s operator, Saratov Airlines, said in a statement on Monday it was temporarily grounding its fleet of AN-148 planes until investigators had established what happened.

It said the plane involved in the crash had undergone thorough checks last month and that it had successfully flown several other routes on the same day as the crash.