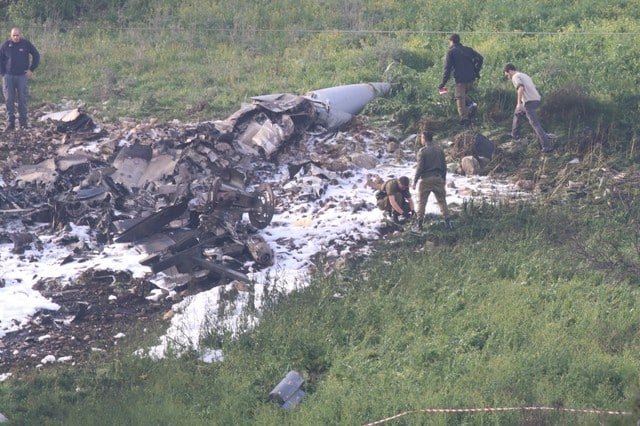 Israeli security forces inspect the remains of the F-16 Israeli war plane near the Israeli village of Harduf, Israel

Israel will face “more surprises” should it again attack Syrian territory, Damascus said on Tuesday, after Syria’s air defences shot down an advanced Israeli warplane during the fiercest flare-up between the old foes in 36 years.

The F-16 jet was hit over northern Israel on Saturday as it returned from a raid on a Syrian position blamed for launching an Iranian-made drone across the border. Iran is supporting President Bashar al-Assad in Syria’s near seven-year civil war.

“Have full confidence the aggressor will be greatly surprised, because it thought this war – this war of attrition Syria has been exposed to for years – had made it incapable of confronting attacks,” Assistant Foreign Minister Ayman Sussan said.

“God willing, they will see more surprises whenever they try to attack Syria,” Sussan said during a Damascus news conference.

The downed F-16 was the first warplane Israel has lost to enemy fire since its 1982 Lebanon war. Its two-man crew survived, with injuries, after bailing out of the stricken jet.

Israel retaliated by destroying around half of Syria’s anti-aircraft batteries, according to an initial assessment shared with Reuters by an Israeli official who requested anonymity.

Israel has said it will press ahead with missions in Syria, where it has launched scores of sorties against suspected arms transfers to Iranian-sponsored Lebanese Hezbollah guerrillas.

“There are no limitations, and nor do we accept any limitations,” Defence Minister Avigdor Lieberman told reporters during a tour of Israel’s border with Syria and Lebanon.

“We will continue to defend our vital security and other interests. And I would like to paraphrase the well-known saying: ‘This is not the time to bark, this is the time to bite.'”

Tehran’s involvement in Syria, including the deployment of Iran-backed forces near the Israeli-occupied Golan Heights, has alarmed Israel. It has also has accused Iran of building precision-guided missile factories for Hezbollah in Lebanon.

Syria and Hezbollah celebrated the F-16 shoot-down as a blow to Israeli military superiority. Israel’s Army Radio said on Tuesday that investigators believed pilot error – rather than Syrian capabilities – were mainly at fault for the F-16’s failure to evade what was probably an aged SA-5 missile.

Israeli military spokesman declined to comment on that report, saying the investigation was ongoing.

Saturday’s incident stirred up further questions in Israel about the effectiveness of a coordination mechanism set up with Russia, which has also been reinforcing and arming Assad’s army.

Russian President Vladimir Putin responded to the flare-up by urging Israeli Prime Minister Benjamin Netanyahu to avoid escalation in Syria. Moscow said on Monday it did not have information to support Israel’s allegation about an Iranian military presence in the site bombed for launching the drone.

Zeev Elkin, a Russian-speaking Israeli cabinet minister who serves as Netanyahu’s interpreter in the talks with Putin, defended the coordination mechanism on Tuesday as granting Israel “freedom of action in the skies above Lebanon and Syria”.

“I don’t think the Russians ever pledged that they would take military action against the Iranians and the Syrians for us,” Elkin told Israel Radio.

“We are going one-on-one against the Syrians. We don’t need assistance from the Russians. We know how to deal with Syrian anti-aircraft fire, as everyone ultimately saw.”

White powder sent to UK parliament found to be non-harmful

Zidane not worried about future before crunch PSG tie