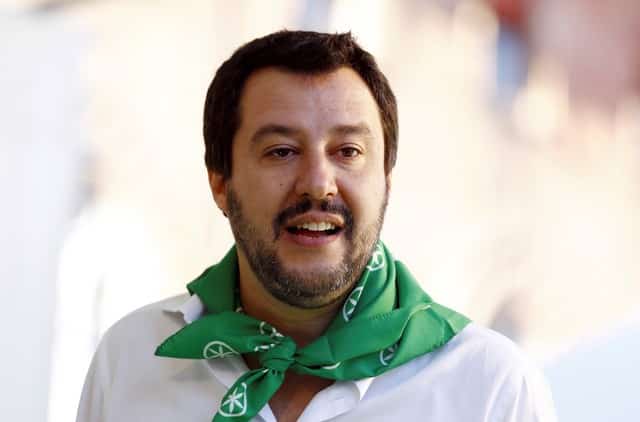 The Northern League, a key partner in the coalition expected to win next month’s parliamentary election, would aim to pull Italy out of the European Union if Brussels refused to re-negotiate fiscal and immigration rules, its economics chief said.

The eurosceptic League is the principal ally of former prime minister Silvio Berlusconi’s Forza Italia in a centre-right coalition that leads polls ahead of the March 4 vote.

The alliance has pledged to reduce the amount Italy pays into the EU budget, review European treaties and give the Italian constitution precedence over laws written in Brussels.

Claudio Borghi, the League’s head of economic policy, told Reuters that, unless they saw progress within two years of taking office, his party would push for drastic action.

“If we don’t get anything by that point … we do not rule out invoking the withdrawal article like Britain did,” he said.

The centre-right coalition, which also includes the nationalist Brothers of Italy, looks the best placed to have a chance of forming a working majority.

Britain’s decision to leave the EU in 2016 sent shockwaves across the continent. Borghi said Forza Italia wanted to use the less radical negotiating tool of reducing payments to the bloc’s budget or even halting them altogether.

The two parties have agreed that whichever wins most votes will name the prime minister and have more control over policy.

A new electoral law makes the outcome of the vote highly uncertain, but poll ratings for Forza Italia of between one and six percentage points ahead of the League suggest the 81 year-old media mogul’s more Europe-friendly agenda will prevail.

League leader Matteo Salvini blames the euro for Italy‘s prolonged economic malaise and expects it to collapse, putting him at odds with Berlusconi, who wants to keep the currency and has promised some of the budget rigour EU rules demand.

Both parties want to impose border controls and oppose the system whereby migrants from outside the EU are the responsibility of the country where they first arrive.

“The EU in its current state is a bankrupt project, it has brought no good to any of its members,” Borghi said.

“Our base position is no to the euro, we might like the European Union without the euro.”

The coalition agreed that two years would be long enough to see how the EU responded, but they could start reducing budget payments earlier, Borghi said.

“We all agreed that the first thing to do is to stop paying them. Why should we pay if they don’t listen to us?”

Borghi said the League also wanted changes to the rules on dealing with failing banks and the internal market for services.

“There is definitely internal competition,” said Borghi, adding that he thought the League would surpass Forza Italia. No polls are published in the two weeks before the elections, when compilers say many undecided voters make up their minds.

The League was born as a group campaigning for independence for the wealthy north from the rest of Italy, but under Salvini its focus has shifted to fighting immigration and the euro.

Allied with France’s National Front in the European Parliament, they advocate a return to the EU’s status before the signing of the Maastricht Treaty, which laid the foundations for the single currency and free movement between member states.

Only 17 per cent of Italians are satisfied with the direction the EU is taking, well behind the average of 34 per cent among their neighbours, but 56 per cent would vote to remain in the bloc if a Brexit-style referendum were held, according to a study by the Bertelsmann Foundation last October.

Borghi said the League would promote its ideas within the coalition, but respect the choice of the voters.

“If the election shows that Forza Italia gets a flood of votes and we don’t get many, I can’t ignore that,” he said.