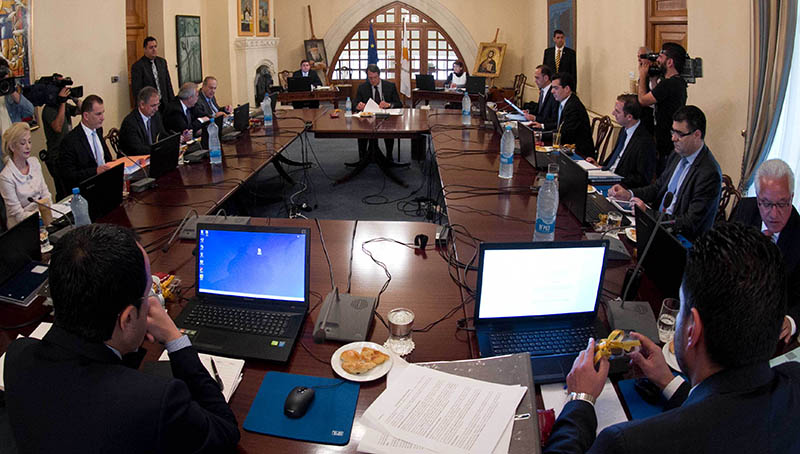 President Nicos Anastasiades announced on Tuesday the composition of his new government. He added seven fresh faces, including three women.

The president appointed Government Spokesman Nicos Christodoulides as head of the foreign ministry and kept Finance Minister Harris Georgiades in the same post.

Education Minister Costas Kadis will be moving to the agricultural ministry and Constantinos Petrides remains at the interior ministry. Ionas Nicolaou will also stay at the justice ministry.

Political scientist and member of the Disy executive bureau, Petros Demetriou, was appointed as the new head of the president’s office.

Anastasiades said the composition of the new cabinet reflects his commitment to putting together a council of ministers that will enjoy ‘broader social acceptance’.

“I believe that,” Anastasiades said. He added that society would decide if this was true.

Outgoing Agriculture Minister Nikos Kouyialis thanked Anastasiades for trusting him with the post, which he has held for the past five years, and said he is he is at ease with himself that he fulfilled his duties.

Outgoing Defence Minister Christoforos Fokaides also thanked the president for appointing him to that ‘key post’ for four years and wished ‘every success for the continuation of the same course of reform and modernisation’.

Deputy Government Spokesman Victoras Papadopoulos said earlier in the day that personal reasons would not allow him to continue.

The outgoing ministers of transport and foreign affairs, Marios Demetriades and Ioannis Kassoulides both resigned from their posts. Demetriades said he had decided to leave politics and return, as a professional, to the private sector. Kassoulides said he wanted to retire.

The last day for the current council of ministers is February 28. The new members will be sworn in on March 1.

Edek said it hopes the new team will be able to respond to its obligations to the Cypriot people. The party said it will continue in opposition to operate constructively in the best interest of the Cypriot people and the Cyprus problem.

Diko said that the ministers, and the government in general, will be judged on their work based on the public interest.