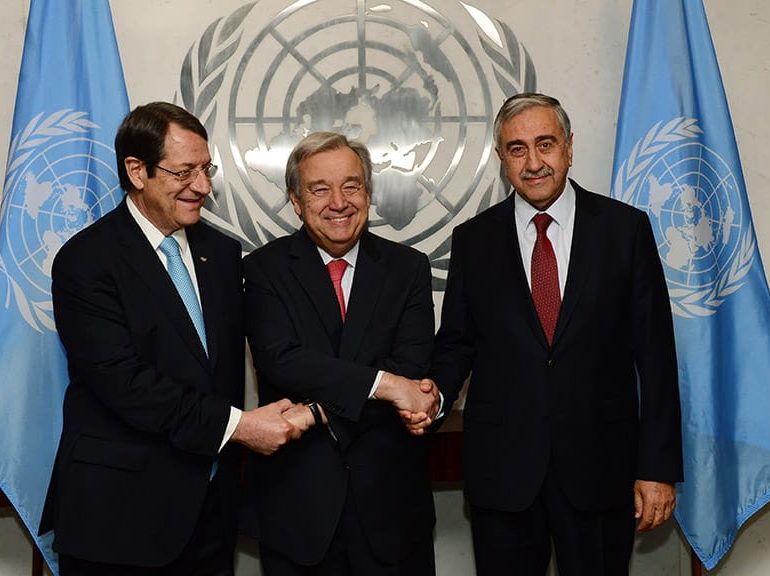 Α SOLUTION to the Cyprus problem was the best way of resolving the hydrocarbons dispute, between Cyprus and Turkey, for good, UN Secretary-General Antonio Guterres said, as the Turkish navy continued to prevent Italian energy firm ENI from reaching an offshore field in the island’s exclusive economic zone.

Guterres regretted that tensions over hydrocarbons exploration had escalated once again, and stressed that all concerned parties should do their utmost to defuse tensions, said a UN spokesperson regarding the latest developments in Cyprus’ exclusive economic zone.

In a written reply to a question, the Secretary-General, “reiterates that it is not for the UN Secretariat to take a position on the rights of member states under the treaties to which they are party or under general international law”.

A solution to the Cyprus problem “constitutes the best chance of resolving this issue once and for all and unlocking collaborative and mutually beneficial solutions”.

He recalled that the Turkish Cypriot and Greek Cypriot leaders had previously agreed that natural resources in a unified Cyprus would lie within the competence of the future federal government.

“The Secretary-General reiterates a point in his latest report on UNFICYP (January 9, 2018) that any natural resources found around Cyprus could benefit both communities” the spokesperson concluded.

Ongoing diplomatic efforts are trying to resolve the standoff in the EEZ’s block 3, caused when Turkish warships blocked a drillship from reaching its target to conduct exploratory drilling for natural gas.

Cyprus is awaiting the results of these efforts, government spokesman Nicos Christodoulides said.

Christodoulides said it was issued at the request of the United Nations Interim Force In Lebanon (UNIFIL) and the Russian Federation.

He clarified that with the Navtex, two areas north and south block 3 are reserved and not within the block itself.

“They submitted a request to the Republic of Cyprus as the competent authority in order to reserve the areas. This is the usual procedure,” he said.

Turkish actions in Cyprus’ EEZ will be addressed during a meeting, on Thursday morning, between President Nicos Anastasiades and UN Deputy Special Adviser Elizabeth Spehar.

“Turkey’s moves in the region are not conducive to the effort to create the necessary climate in order to resume talks,” the spokesman added.

European Commission President Jean-Claude Juncker said on Wednesday he was “strictly against the behaviour of Turkey”.

The Russian foreign ministry expressed the hope that all interested states will act in accordance with international law as regards the situation.

“We believe that the interested parties should refrain from taking steps that could escalate tensions in the Eastern Mediterranean, raising the existing regional differences,” spokeswoman Maria Zakharova said according to Tass news agency.

According to Zakharova, such incidents “once again point to the need to find ways to resolve the Cyprus issue as soon as possible, based on the UN criteria.”

She further noted that “our stance remains unchanged: we call for achieving a comprehensive, fair and viable solution for the sake of all of the island’s residents.”

“We will support a decision the Cypriots will find,” she said.

Last Friday Turkish warships, claiming to be participating in military drills in waters off the east of the island, stopped the Saipem 12000 drillship en route to Cuttlefish, a site in block 3 where it was scheduled to drill an exploratory gas well.

Since then, the drillship has been immobilized at a distance of approximately 50km from the target site.

The Cyprus government said it was trying to resolve the issue through diplomatic means, without escalating tensions, while Turkey refuses to budge, citing its rights and those of the Turkish Cypriots.

Turkish President Tayyip Erdogan on Tuesday warned Cyprus not to “overstep the mark” in the eastern Mediterranean.

Following a call on Turkey by the European Union to avoid threats and “refrain from any actions that might damage good neighbourly” ties, the US too urged Turkey to stop.

“The United States recognizes the right of the Republic of Cyprus to develop its resources in its Exclusive Economic Zone”, said a State Department Spokesperson, adding that the US policy on Cyprus’s EEZ is longstanding and has not changed.

In a written reply to questions concerning Turkey’s actions, the State Department said it continues to believe that “the island’s oil and gas resources, like all of its resources, should be equitably shared between both communities in the context of an overall settlement”.

“We discourage any actions or rhetoric that increase tensions in the region,” said the spokesperson.

The tension over Cyprus is likely to be discussed, within other EU-Turkey issues, but no Mogherini-Celik bilateral discussion has been scheduled yet.

For its part, the Italian government reiterated it was monitoring the situation and would take “all possible diplomatic steps to resolve the issue.”

In September 2011 Ankara and the breakaway regime signed a ‘Continental Shelf Delimitation Agreement’.

It is on this basis that Turkish Cypriots declared an ‘Exclusive Economic Zone’ which in effect claims that half of Cyprus’ EEZ belongs to them, namely blocks 1,2,3,8,9,12 and 13, including a few kilometres of the Aphrodite gas field.

Turkey itself is laying claim to parts of various blocks in Cyprus’ EEZ saying the areas in question form part of its continental shelf. The claim includes part of blocks 1, 4, 5, 6 and 7, to the west and southwest of the island.