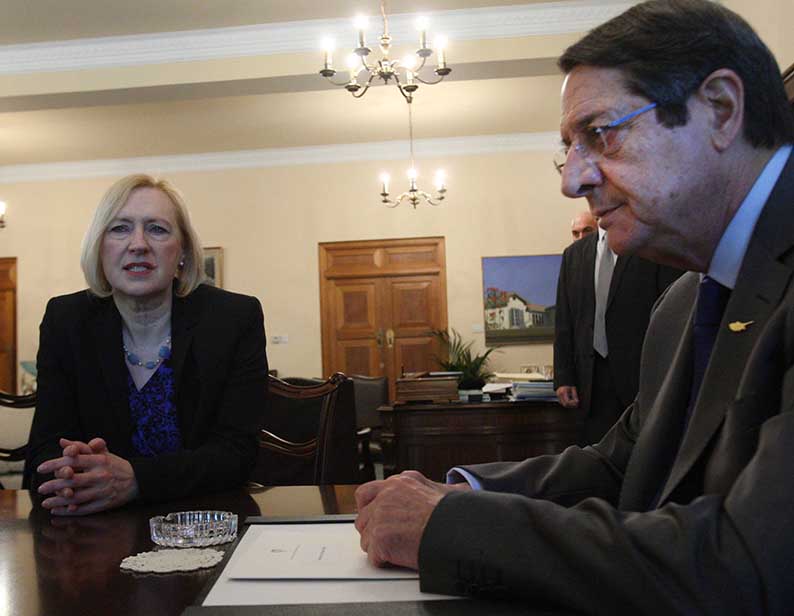 President Nicos Anastasiades will meet the Deputy Special Advisor of the UN Secretary-General in Cyprus, Elizabeth Spehar on Thursday morning.

Government Spokesman Nicos Christodoulides, said on Wednesday the president would meet Spehar to express “the need to create prospects for resuming a dialogue that has prospects for a positive outcome”.

He added however, that Turkey’s actions were not helpful. “This behaviour does not help the efforts of the president or the UN Security Council,” Christodoulides said.

Anastasiades said last week that his meeting with Spehar was aimed at exploring the prospects for the resumption of the settlement talks.

Spehar, “will be there to listen,” said Spokesman Aleem Siddique, underlining the oft-repeated position of the UNSG that it was up to the two sides to agree a resumption of the peace process.

“The Secretary-General has always made clear that his Good Offices and the Deputy Special Adviser Ms Elizabeth Spehar remain at the disposal of both sides, when they are ready,” Siddique told the Cyprus News Agency.

Spehar was meeting Anastasiades at his request, he said, adding that “these are preliminary discussions”.
The meeting is scheduled for 9.30am, at the Presidential Palace. There is no similar meeting planned with Turkish Cypriot leader Mustafa Akinci.

Anastasiades had said that his next move, regarding the peace talks, was dependent on his conditions being met as well as on the stance of the Turkish side.

Finding common ground could be difficult however, as Anastasiades wants things to continue from where they left off in Crans-Montana, while the Turkish Cypriot side has been calling for a new approach.

Matters have been further complicated following Turkey’s decision to use its warships to prevent Saipem 12000 drillship, contracted by Italian oil company ENI, reaching offshore block 3 in the Cypriot EEZ, where it was scheduled to carry out exploratory drilling.

Last Saturday the Turkish Cypriot ‘foreign ministry’ said it would not accept the extension of ENI’s activities into Block 3. It had said that measures were taken by the Greek Cypriot side that did not take into account the rights of the Turkish Cypriots. The ‘TRNC’ would take the action deemed necessary, in co-operation with Turkey, to defend these rights, it said.