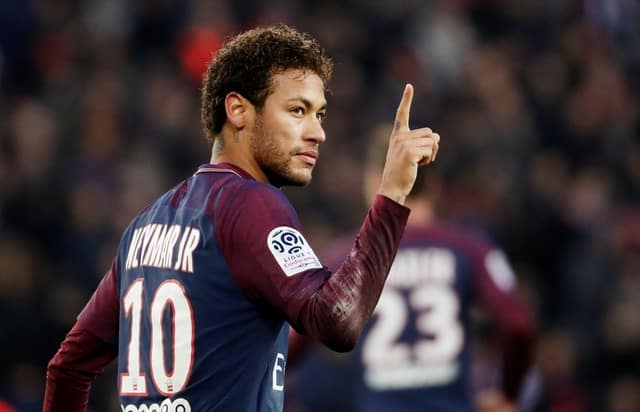 The world's most expensive player Neymar has scored a remarkable 28 goals in 27 games in all competitions for the runaway Ligue 1 leaders, although he has not always cut a happy figure in Paris

As Paris St Germain gear up for their blockbuster Champions League last-16 first leg tie against Real Madrid on Wednesday, much of the media attention has focused on whether their most prized asset Neymar will eventually make a sensational move to the Santiago Bernabeu.

The Brazilian became the most expensive player of all time last August when PSG swiped him from Barcelona for 222 million euros, although Real have coveted the forward since he was 13-years-old.

Real president Florentino Perez recently said his side tried to sign Neymar before he joined rivals Barca in 2013 and reiterated his desire to bring the Brazilian to Madrid.

Neymar has scored a remarkable 28 goals in 27 games in all competitions for the runaway Ligue 1 leaders, although he has not always cut a happy figure in Paris.

His furious dispute with strike partner Edinson Cavani in September over the right to take set pieces reared its head again last month when the Brazilian refused to allow the Uruguayan to take a penalty against Dijon that would have made him the club’s all-time top scorer.

The incident prompted some PSG fans to boo Neymar, even though he scored four goals in the 8-0 win.

Paris-based journalist Joao Henrique of Brazilian website Universo Online told Reuters Neymar would be interested in joining Madrid eventually, but does not envisage him leaving PSG in the immediate future.

“Neymar was disappointed when he first got to Paris, he soon realised the club was nothing like as big as Barca and the quality of the league was worse than in Spain, then he had the problem with Cavani which kept rumbling on,” he said.

“But now seeing the quality of PSG has encouraged him and there are no more ego disputes. He wouldn’t say no to Madrid because he played for Barca, he admires their grandeur and being the heir to Ronaldo excites him, but his short term plans are to win the Champions League and Ballon d’Or with PSG.”

Neymar scored the only goal in a 1-0 win at Toulouse on Saturday, after which defender Thiago Silva insisted his compatriot was content in France.

“I don’t know, I can’t speak for him but I hope Neymar stays with us. I think he’s very happy with us, he has a very important place in the dressing room,” he said.

Real have suffered a dramatic fall from grace after winning the Liga and Champions League last season and are 17 points adrift of league leaders Barcelona, with beating PSG looking like coach Zinedine Zidane’s last opportunity to cling to his job.

The Frenchman usually refuses to comment on transfer speculation but even he could not resist praising the Brazilian last month, declaring “he’s a player who everyone on planet football loves”.

“I would love to see Neymar come to Madrid and I think he would fit in perfectly in the team,” Marcelo told Brazilian network Esporte Interativo last week.