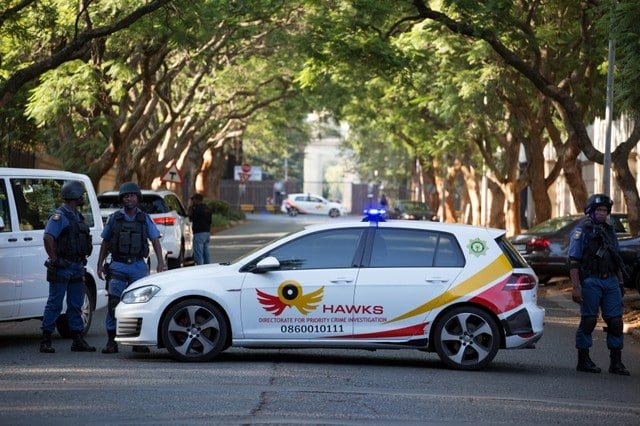 Police close off roads around the home of the Gupta family, friends of President Jacob Zuma, in Johannesburg

South Africa’s ANC unveiled plans on Wednesday to sack President Jacob Zuma via a parliamentary no-confidence vote, hours after armed police raided the luxury home of his friends, the Gupta brothers, as part of an anti-corruption investigation.

In his first response to an avalanche of pressure from the African National Congress (ANC) for him to quit, Zuma – who has been dogged by scandal throughout his political life – proclaimed his innocence and said he was being “victimised” by Nelson Mandela’s former liberation movement.

When asked point-blank if would step aside, he avoided the question and continued to allege a lack of principle in moves by the party’s National Executive Committee to oust him. He did say he would make a formal statement later on Wednesday.

He did not comment on the police raids, which marked a dramatic tightening of the net around the 75-year-old and the political faction around him accused of milking state resources for their own ends.

Even if he refuses to quit, with the ANC backing an opposition-led no-confidence motion on Thursday, Zuma appears to have run out of road after nine years in office marked by political tumult and economic stagnation.

ANC chief whip Jackson Mthembu said Deputy President Cyril Ramaphosa, whose election as head of the ANC in December marked the beginning of the end of Zuma‘s tenure, could be sworn in as head of state as early as Friday.

“After we have voted for the removal of the President of the Republic tomorrow – and depending on the availability of the Chief Justice – we will also elect a new president,” Mthembu told a news conference in Cape Town.

The rand, which has gained ground whenever Zuma has hit political turbulence, soared more than one percent to a 2-1/2 year high of 11.79 against the dollar.

The speed of Zuma‘s demise after two weeks of dithering by the ANC has stunned South Africa.

The early morning raid, which the police’s elite Hawks unit said resulted in three arrests, took place amid reports Zuma was preparing to tell the country he was stepping down

“You can’t bring a matter of this nature to court and not charge the people who have benefited the most,” the source, who has knowledge of the police’s moves, told Reuters.

Zuma and the Guptas, a family of wealthy Indian-born businessmen, deny any wrongdoing. A lawyer for the Gupta family said he could not comment on the raid because he had yet to see the search warrant.

Meanwhile, there was chaos and confusion at Pretoria’s Union Buildings, the official seat of government, over reported plans for Zuma to address the country.

Finance Minister Malusi Gigaba said Zuma would speak at 0800 GMT and satellite trucks were in position overnight. However, Zuma‘s office denied there had been any “official communication” of an address and the scheduled time came and went.

Adding to the mystery, a copy of an email, purportedly from deputy presidential communications director Shadi Baloyi, circulated on Twitter telling Pretoria police that plans for a “special media briefing” by Zuma at 0800 GMT had been cancelled.

“Kindly ignore my earlier request, as the briefing will not take place tomorrow,” Baloyi wrote. Reuters could not confirm the email’s authenticity and Baloyi did not answer her phone or respond to text messages.

Zuma‘s spokesman did not answer his phone.

Shortly after dawn, a dozen Hawks police officers sealed off a street leading to the Gupta mansion in Johannesburg’s upscale Saxonwold suburb. One blocked access to Reuters, saying: “This is a crime scene.”

Minutes later, an unmarked police van left the compound as residents applauded police officers and hurled abuse at security guards for the Guptas, who have been accused by South Africa’s top anti-corruption watchdog of influence-peddling and swaying the appointment of cabinet ministers.

“Finally something is being done about it. These guys must get out of our country. They must leave us alone. They have done enough damage,” said Tessa Turvey, head of the local residents’ association, standing outside the compound’s iron gates.

Police also raided the Guptas’ Oakbay holding company in Johannesburg’s Sandton financial district, according to a security guard outside the building.

On Tuesday, the ANC ordered Zuma to step down as president of the country, giving him no firm deadline but saying the party was sure he would comply and “respond” on Wednesday.

Hawks spokesman Hangwani Mulaudzi said the raid was part of an investigation into influence-peddling allegations that are also the focus of a judicial inquiry into wider corruption involving the Guptas, dubbed “state capture” in local media.

“We’re not playing around in terms of making sure that those who are responsible in the so-called state capture, they take responsibility for it,” Mulaudzi said.

He declined to give details of what was seized or if the business premises of the Guptas, whose commercial empire stretches from mining to media, would also be raided. Under South African law, suspects cannot be named until they appear in court.

Woods signals days of being warm and cuddly Tiger over