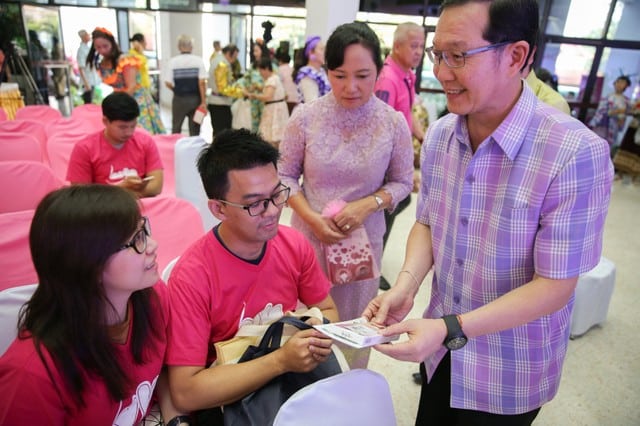 Thailand has tried cash bonuses and tax incentives to boost the country’s birth rate, but on Valentine’s Day today it adopted a new approach – handing out vitamin pills.

Like several other Asian countries, Thailand is ageing rapidly. Birth rates have dropped sharply from more than 6 children per woman in 1960 to 1.5 in 2015, according to World Bank figures.

In Bangkok, health officials handed out folic acid and iron pills in pink boxes at six locations to entice couples to prepare for pregnancy. The pills came with leaflets explaining how to be healthy in order to conceive.

Relationships and sex were previously a taboo subject but attitudes have changed and they are now discussed more publicly. Still, health experts say Thailand will have to talk even more about conception and birth if it wants to boost its population.

Together with China, the country has the highest proportion of elderly people of any developing country in East Asia, World Bank figures show.

The population has peaked and will begin to decrease in 2030, pointing to potential economic problems, such as labour shortages and a smaller base of income tax payers as the working-age population shrinks.

Successive Thai governments have introduced various schemes to encourage baby-making but, like in neighbouring Singapore, whose birth rate is amongst the lowest in the world, they haven’t seen much success.

Thailand‘s cash bonuses and tax incentives for people with children have done little to boost births but analysts said they weren’t generous enough to prompt Thais to have more children. They didn’t cover the real cost of raising a child, they said.

Thailand‘s 2015 birth rate of 1.5 per woman is below 2.6 births in neighbouring Cambodia and 2.1 in Malaysia. Health experts say the birth rate needs to be 2.1 to keep a population growing.

Various reasons have been put forward to explain the falling birth rate in Thailand, from higher living costs and work commitments to the shift of the population away from farms, where big families are needed, to urban centres.

Some blame a hugely successful free-condom campaign in Thailand in the early 1990s – aimed at combatting HIV/AIDS and which was widely copied around the world – as a factor that has reduced the birth rate.

“From 1970 to 1983 there were an average of 1 million Thais born each year. After that the birth rate began to decline. Now there are just over 700,000 people born each year,” Kasem Wetsutthanon, director of the Metropolitan Health and Wellness Institution, told Reuters.

“At the moment Thai couples are having an average of 1.5 children. Ideally, it should be 2.1 if we are to maintain the population growth,” he said.

“Now, many are thinking that it is a burden to have children, unlike in the past when children were important for the family.”

Nalin Somboonying, 27, who has a four-year-old child, said some people feel they need material possessions first before starting a family.

“I think nowadays people want to be ready first. They feel they must have a house, a car, first before having a child,” she told Reuters.

Satta Wongdara, 31, who with his wife picked up some of the pills at a booth in Bangkok’s Lak Si area, blamed long work hours.

Still, Kasem said he hopes the pills, which he called ‘magic pills’ will get Thais thinking twice about pregnancy.

“We want to get people to have more children.”