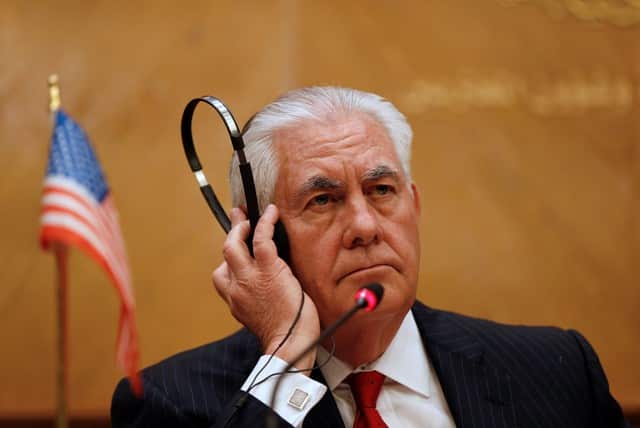 The United States’s work on a new Middle East peace plan is “fairly well advanced”, Secretary of State Rex Tillerson said on Wednesday, though he provided no details on an initiative which comes amid deep Palestinian scepticism about US intentions.

Tillerson, who was speaking during a visit to Jordan to sign a five-year $6.4 billion aid package that extends US support to a key Arab ally, said President Donald Trump would decide when to announce the peace plan.

The United States infuriated even its Arab allies in December when Trump recognised Jerusalem as the capital of Israel and initiated the move of the US embassy from Tel Aviv. Palestinian President Mahmoud Abbas said he would not cooperate with the United States in its efforts as a mediator.

“I have seen the (administration’s peace) plan… It’s been under development for a number of months. I have consulted with them on the plan, identified areas that we feel need further work. I will say it’s fairly well advanced…” Tillerson said.

There has been little detail on the plan so far. Officials told Reuters in December it would deal with all major issues, including Jerusalem, borders, security, the future of Jewish settlements on occupied land and the fate of Palestinian refugees, and would also urge Saudi Arabia and other Gulf states to provide significant financial support to the Palestinians.

The plan is being crafted by a team led by Jared Kushner, Trump’s son-in-law and senior adviser, and US Middle East envoy Jason Greenblatt, both of whom have travelled to key regional capitals since the Trump administration came to office.

Palestinians have grown increasingly concerned that any plan Trump unveils will shortchange them, a fear exacerbated by his move on Jerusalem, which upended decades of US policy that the status of the ancient city must be decided in negotiations.

Jerusalem is home to sites holy to Muslims, Jews and Christians.

Jordanian King Abdullah’s Hashemite dynasty is the custodian of the Muslim holy sites, making Amman particularly sensitive to any changes of status there. The king has warned that Trump’s decision could undermine stability and fuel radicalism.

Jordanian foreign minister Ayman al-Safadi reiterated on Wednesday that a two-state solution to the Israeli-Palestinian conflict was the “only solution we believe can work”.

The Trump administration has said it would back a two-state solution if the parties agreed to it.

Trump had threatened to cut off financial aid to countries that backed a UN resolution calling for Washington to reverse its Jerusalem decision. Jordan backed the resolution.

But the Trump administration has courted King Abdullah, a moderate pro-Western Arab leader whose kingdom has long upheld US interests in a turbulent region.

On Wednesday Tillerson met the king at his personal residence where the two emphasised strong US-Jordanian ties.

Commenting on the memorandum of understanding signed for $6.375 billion in aid on Wednesday, the US State Department said: “(It) highlights the pivotal role Jordan plays in helping foster and safeguard regional stability and supports US objectives such as the global campaign to defeat Isis, counter-terrorism cooperation, and economic development.”

Isis is an acronym for the militant Islamic State group.

Conflicts in neighbouring Syria and Iraq have damaged Jordan’s economy, forcing it to borrow heavily from external and domestic sources. Jordan has been an important part of the US-led coalition battling Islamic State in Iraq and Syria.