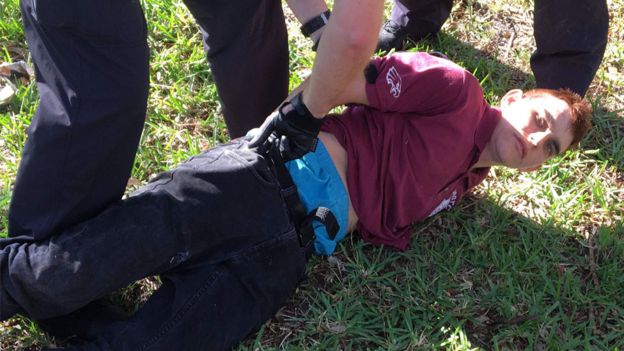 Cruz was armed with an AR-15-style rifle and had multiple ammunition magazines when he surrendered to officers, police said

The Federal Bureau of Investigation was warned last year about an ominous online comment by the 19-year-old man accused of killing 17 people in his former high school but was unable to locate him, an agent said on Thursday.

Authorities said the ex-student, identified as Nikolas Cruz, walked into the Marjory Stoneman Douglas High School in Parkland, near Miami, on Wednesday and opened fire with an AR-15-style assault rifle in the second-deadliest shooting at a public school in US history.

Cruz participated in the activities of a Florida white nationalist militia, the group’s leader said on Thursday.

“He had some involvement with the Clearwater Republic of Florida cell at some point,” Jordan Jereb said in a telephone interview.

He may also have left warning signs on social media. A person with his name wrote a comment last year under a YouTube video that read “I’m going to be a professional school shooter.” The man who posted the video, Ben Bennight, a Mississippi bail bondsman, was alarmed and contacted the FBI, according to a video he posted online late Wednesday.

“No other information was included with that comment which would indicate a time location or the true identity of the person who made the comment,” FBI Special Agent in Charge Robert Lasky told reporters on Thursday. Investigators were unable to find the commenter, he added.

The FBI is conducting an extensive review of how it handled that tip to see if mistakes were made, a federal law enforcement official told Reuters.

Wednesday’s shooting was the 18th in a US school this year, according to gun control group Everytown for Gun Safety. It stirred the long-simmering US debate on the right to bear arms, which are protected by the Second Amendment of the US Constitution.

President Donald Trump addressed the shooting in a White House speech that emphasized school safety and mental health while avoiding any mention of gun policy.

“It is not enough to simply take actions that make us feel like we are making a difference,” Trump said at the White House. “We must actually make that difference.”

“Now is the time for this country to have a real conversation on sensible gun control laws in this country,” Runcie told a news conference.

Democrats in the US House of Representatives sharply criticised the Republican leadership for refusing to take up legislation on tightening background checks for prospective gun buyers.

“It’s appalling,” Representative Mike Thompson told a news conference. “Thirty people every day are killed by someone using a gun, and the best we can do is say we need more information?”

The Republican-controlled Congress last year revoked Obama-era regulations meant to make it harder for those with severe mental illness to pass FBI background checks for guns, saying the rule deprived the mentally ill of their gun rights.

At least one member of Trump’s cabinet called for Congressional action.

“Personally I think the gun violence, it’s a tragedy what we’ve seen yesterday, and I urge Congress to look at these issues,” Treasury Secretary Steven Mnuchin told lawmakers on Thursday.

Authorities said Cruz wore a gas mask as he stalked into the school carrying a rifle, ammunition cartridges and smoke grenades. He then pulled a fire alarm, prompting students and staff to pour from classrooms into hallways, according to Florida‘s two US senators, who were brief by federal authorities.

Cruz was expected to appear in court Thursday afternoon for a bond hearing, said Constance Simmons, a spokeswoman for the state attorney’s office. He loved guns and was expelled for unspecified disciplinary reasons, police and former classmates said.

Cruz had recently moved in with another family after his mother’s death in November, according to Jim Lewis, a lawyer representing the family and local media, bringing his AR-15 along with his other belongings.

The family believed Cruz was depressed, but attributed that to his mother’s death, not mental illness.

The first victim of the attack was publicly identified on Thursday as Aaron Feis, an assistant coach on the school’s football team and a school security guard who was shot while shielding students, the team said on Twitter.

An armed law enforcement officer stationed at the school did not encounter Cruz during his rampage, Broward County Sheriff Scott Israel told reporters.

Colton Haab, a 17-year-old member of the Junior Reserve Officer Training Corps at the high school, said he realized the alarms were not a drill after hearing several shots fired and helped barricade fellow students behind curtains made of Kevlar, a material used to make bullet-proof vests.

“We grabbed two pieces of two-by-four, a fire extinguisher and a chair,” Haab said. “We were going to try to stop him with whatever we had.”

OTHER MAJOR SCHOOL SHOOTINGS IN THE UNITED STATES

AZTEC, New Mexico, Dec. 7, 2017
A 21-year-old man disguised as a student enters the local high school, kills two students and then shoots himself to death.

SAN BERNARDINO, California, April 10, 2017
A man dies of a self-inflicted gunshot wound after killing his estranged wife at North Park Elementary School. An 8-year-old student is also shot to death.

ROSEBURG, Oregon, Oct. 1, 2015
A man opens fire on the campus of Umpqua Community College, killing nine people before he is shot dead by police.

MARYSVILLE, Washington, Oct. 24, 2014
A freshman at Marysville-Pilchuck High School fatally wounds four students in the cafeteria before killing himself.

SANTA MONICA, California, June 7, 2013
A onetime digital media student fatally shoots his father and brother, sets their house on fire, and then kills three people at Santa Monica College. The gunman kills himself.

NEWTOWN, Connecticut, Dec. 14, 2012
A man fatally shoots his mother, then kills 20 children and six adults before killing himself at Sandy Hook Elementary School.

HUNTSVILLE, Alabama, Feb. 12, 2010
A biology professor at the University of Alabama at Huntsville opens fire during a staff meeting, killing three faculty members and wounding three.

BATON ROUGE, Louisiana, Feb. 8, 2008
A nursing student at Louisiana Technical College kills two classmates and herself in a classroom.

SHEPHERDSTOWN, West Virginia, Sept. 2, 2006
A 49-year-old man shoots himself and his two sons to death during a visit to the campus of Shepherd University.

TUCSON, Arizona, Oct. 29, 2002 – A failing student shoots and kills three professors and then himself at the University of Arizona School of Nursing.

GRUNDY, Virginia, Jan. 16, 2002
A recently dismissed graduate student kills a dean, a professor and a student at the Appalachian School of Law and wounds three others.

LITTLETON, Colorado, April 20, 1999
Two teenagers rampage through Columbine High School, fatally shooting 12 students and a teacher and wounding more than 20 others before killing themselves.

JONESBORO, Arkansas, March 24, 1998
Two boys, ages 11 and 13, fire on their middle school from woods, killing four girls
and a teacher and wounding 11 others.