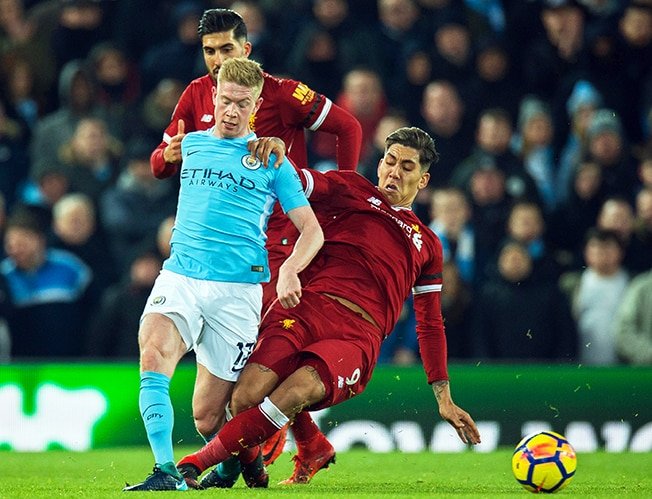 Liverpool’s 5-0 victory in Porto on Wednesday and Manchester City’s 4-0 stroll alongside the Rhine in Basel 24 hours earlier were a Premier League show of force that reverberated across Europe.

The continent’s most wealthy domestic competition has not punched its weight in the Champions League since Chelsea ambushed Bayern Munich to lift the trophy in 2012.

Since then the spoils have been shared out by clubs from La Liga and the Bundesliga with Real Madrid winning it three times, Barcelona once and Bayern Munich once.

Juventus, Atletico Madrid and Borussia Dortmund have reached the finals in that period in which only Chelsea and Manchester City from England have contested semi-finals.

Last season Leicester City were the only English representative in the quarter-finals while in 2012-13 and 2014-15 no English team made it to last eight.

That relative drought could be about to end during a season in which Pep Guardiola’s Manchester City have turned the Premier League title race into a procession.

Liverpool and Man City look 99 percent certain to be in the hat for the quarter-finals while Tottenham Hotspur, who drew 2-2 away to Juventus on Tuesday, are favourites to join them.

Manchester United and Chelsea are still to play the first legs of their last-16 ties.

Jose Mourinho’s United will start as favourites against Sevilla, and while Chelsea could have their work cut out to get past La Liga leaders Barcelona, it is not too fanciful to imagine five of the last eight coming from the Premier League.

It is the first time that five clubs from one country have advanced from the group phase and on five of the six previous seasons that all of the English clubs involved reached the knockout stage, at least one has made it to the final.

While the road to Kiev is still a long one, the statistics underline the resurgence of the English clubs this season.

Liverpool are the competition’s top scorers with 28 goals so far and their win in Porto was the joint biggest away Champions League knockout victory, equalling Bayern Munich’s 5-0 win at Sporting in February 2009 and Real Madrid at Schalke in February 2014.

Individually four of the top eight scorers are from English clubs with Tottenham’s Harry Kane and Liverpool’s Roberto Firmino in second place on seven, with Liverpool’s Sadio Mane and Mohamed Salah on six.

United manager Jose Mourinho warned during the Champions League hiatus that the competition only really began in February when the cream inevitably rose to the surface.

He also downplayed the chances of English clubs, saying the weekly intensity of the Premier League took too much of a toll.

Yet with the so-called ‘big four’ of English football now expanded to a ‘big six’ it appears that competitiveness at the top end of the Premier league has raised standards.

It may only be the early skirmishes in the knockout rounds but already it appears the balance of power might be shifting back across the English Channel.

Greece ‘won’t tolerate challenge to its rights after Turkish collision’