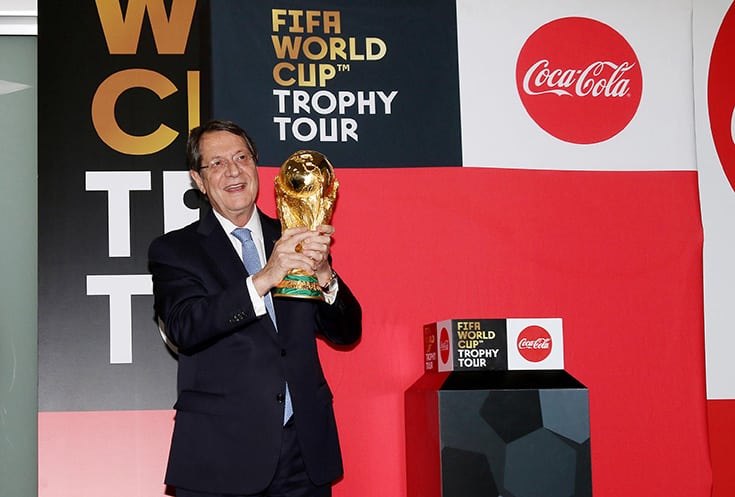 President Nicos Anastasiades on Friday welcomed to Cyprus the Fifa World Cup trophy that arrived on the island as part of the fourth Fifa World Cup Trophy Tour by Coca-Cola.

During the arrival ceremony at the VIP lounge of the old Larnaca airport, Anastasiades had the opportunity to hold the golden trophy, before it was transported to the GSP stadium in Nicosia.

The trophy will be at the stadium until 7pm where football fans who have won entrance tickets through competitions will have the opportunity to see it and take photos with it. In total, 6,000 tickets were given to fans. Outside the stadium, a number of events are taking place.

Anastasiades said that it was an honour that Cyprus was included in the tour.

“Such events, especially in our days, where an amazing dynamic has grown around football, and football players are often role models for our youth, suggest that the players’ duty is to exemplify those standards that would inspire positive behaviour, fair play, ethics and dignity,” he said.

The next stop for the trophy is Ramallah, Palestine.

The trophy tour kicked off last September in Russia, where the tournament will be held, and will visit more than 50 countries across six continents, travelling 126,000 kilometres in the nine months leading up to the 2018 World Cup.

Cyprus looking at MOT for motorcycles