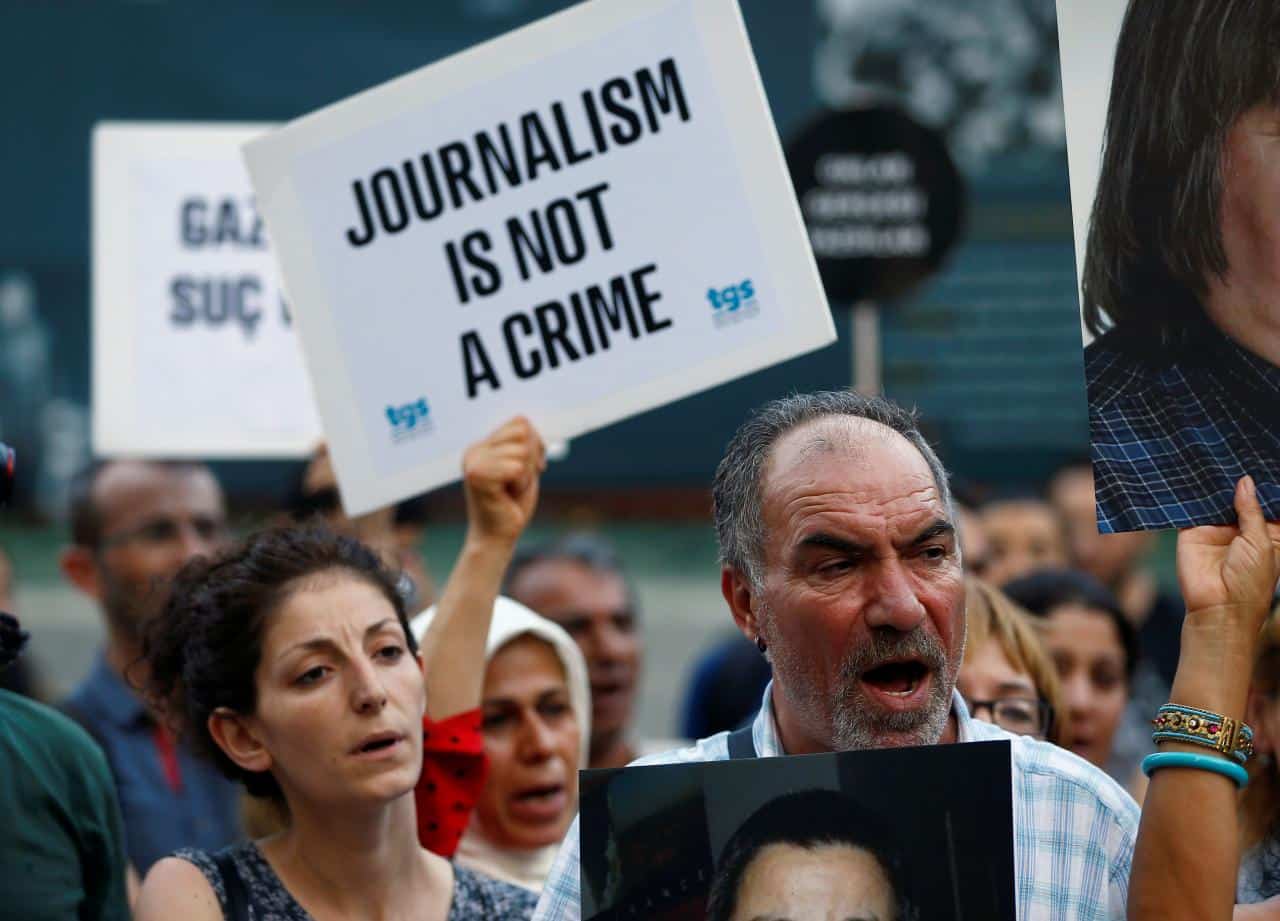 Demonstrators shout slogans during a protest against the arrest of three prominent activists for press freedom, in central Istanbul,Turkey. The EU has been taken aback by President Tayyip Erdogan's security crackdown following a botched coup in 2016 that saw some 50,000 people, including journalists, arrested and 150,000 more, from teachers to judges to soldiers, sacked or suspended from their jobs

The European Union told Turkey on Friday it would not ease travel requirements for its citizens unless Ankara softens counter-terrorism laws that the bloc says are excessive.

The EU has been taken aback by President Tayyip Erdogan’s security crackdown following a botched coup in 2016 that saw some 50,000 people, including journalists, arrested and 150,000 more, from teachers to judges to soldiers, sacked or suspended from their jobs.

That has soured the bloc’s relations with its Nato ally that is also instrumental in keeping a lid on Middle East immigration to Europe.

Turkey has been seeking to mend ties, telling the EU this month it had met all criteria for visa-free travel to the bloc.

But Belgium Foreign Minister Didier Reynders said Ankara must first ease its terrorism laws, which Turkey has long declined to do. Turkey says it needs them, given the severity of security threats it faces on its own soil and in the region.

“If it is possible to align the legislation with the values of the European Union, it will be possible to make some progress,” Reynders said on the sidelines of an EU foreign ministers’ meeting joined by Turkey‘s EU minister, Omer Celik.

“The link is this – a real evolution in Turkey in the legislation on terrorism and the possibility to move on the visas.”

The EU suspended Turkey‘s long-stalled membership talks last year over democracy concerns under Erdogan and his jibes at some of the bloc’s members. But next month it is expected to offer Ankara more money for hosting Syrian refugees.

“Turkey understands that in principle Europe is the most reliable and predictable neighbour they have, and they are well advised to have a good relationship,” he told reporters. “There are some signals but when it comes to issues of rule of law, the situation is still not satisfactory.”

Celik, who did not speak to journalists on arriving for the talks, will also discuss with the EU ministers Turkey‘s latest military intervention in the Syrian province of Afrin, which the bloc has expressed concern about.

Erdogan on Thursday hosted the top US diplomat, Rex Tillerson, in a bid to ease the latest tensions between the two over their policies in the multi-sided war in Syria.

German Chancellor Angela Merkel on Thursday also demanded a fast and fair judicial process to secure the release of a German-Turkish journalist jailed in Turkey a year ago.