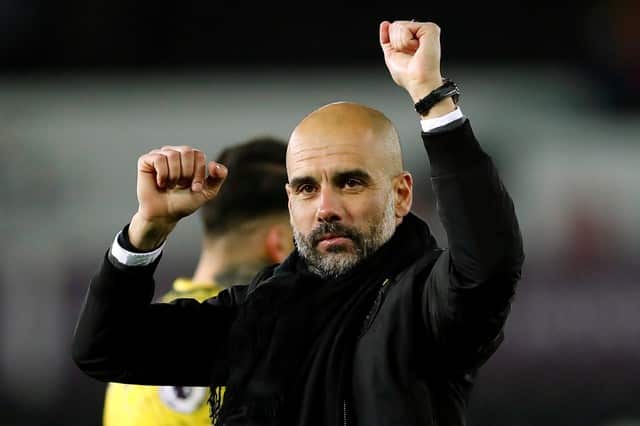 Manchester City are sweeping all before them this season but talk of a possible unprecedented quadruple might need to be postponed at least until after Monday’s trip to FA Cup bogey side Wigan Athletic in the fifth round.

Not only that, but the following season Wigan went to the Etihad Stadium and repeated the feat, winning a quarter-final 2-1 against a side that weeks later would be crowned Premier League champions under Manuel Pellegrini.

Those days seem a long time ago for Wigan who are vying for promotion back to the second-tier of English football.

City, meanwhile, are scaling new heights with Pep Guardiola working his magic. They are 16 points clear at the top of the Premier League, are on the verge of the Champions League quarter-finals and next week will play Arsenal in the League Cup final.

Yet despite the gulf in quality between the two sides, the FA Cup being the FA Cup means Monday’s conclusion to the fifth round promises to be an intriguing one.

Wigan boss Paul Cook would be well-advised to ban his players from watching City’s 4-0 hammering of Basel on Tuesday in the Champions League.

Instead he may reference second-tier Bristol City’s plucky 5-3 aggregate defeat to City in the League Cup semi-final as proof of what can be achieved with a positive attitude.

“You can sit here and talk about the superlatives, about how good they, but the reality is for us that we have to try to beat them,” Cook, whose side knocked out top flight West Ham United in the fourth round, told a news conference on Wednesday.

“Everyone who comes before them they seem to put away comfortably at the minute and for us it’s a massive challenge. Can we take the game to them at times? We have to believe that key moments in the game can go for us.

“It’s hard to say it’s just a normal game because they are one of the best teams in the world. We’ll give them the utmost respect. We’ll have to study them and come up with a plan.

“Good luck with that one!”

Tottenham Hotspur, who like City were impressive in the Champions League this week, drawing 2-2 with Juventus, will also be wary of a slipping on a banana skin when they travel to Rochdale who currently prop up League One (third-tier).

Sunday’s clash at Spotland Stadium will be played on a newly-laid pitch after Rochdale’s threadbare surface came under fire after their fourth-round defeat of Millwall.

Tottenham have never played Rochdale but will need no reminding of how the Cup can be a leveller after they needed a Wembley replay to beat League Two side Newport in round four.

Manager Mauricio Pochettino will likely rotate his squad for the trip, although he knows the FA Cup could offer the more likely route to a first piece of silverware.

On Saturday, twelve-times winners Manchester United are at Huddersfield Town while West Bromwich Albion and Southampton take a breather from their relegation battle at the Hawthorns.

Brighton and Hove Albion host Coventry City and in-form Swansea City are away at Sheffield Wednesday.

Garbage collectors call for clustering of services, not ruling out strikes