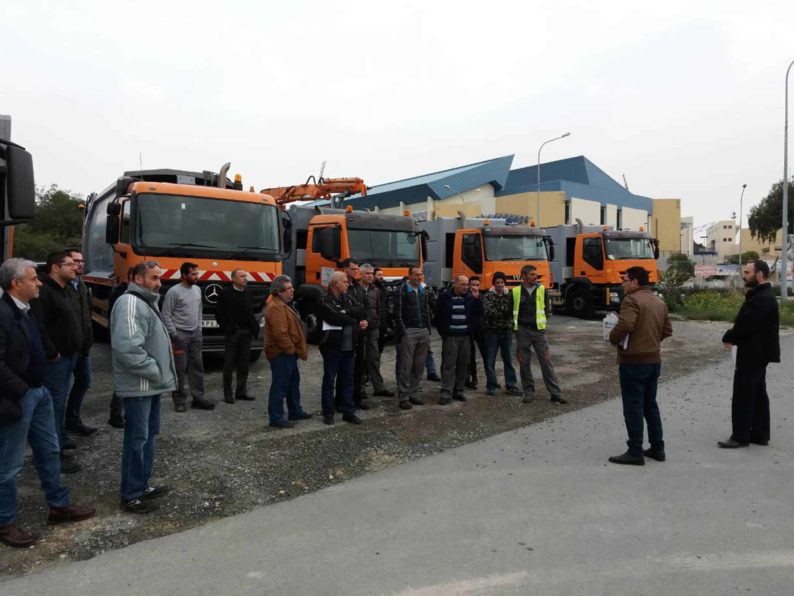 Municipal dustmen are urging their employers to seriously consider clustering garbage collection services and avoid outsourcing to private companies to save future jobs in local government and reduce costs, a trade union representative said on Friday.

Dustmen from all districts are holding meetings with their trade unions from Sek and Peo, in a bid to convince municipalities to proceed with clustering of garbage collection services instead of assigning the job to private companies.

Scores of dustmen that work at the Larnaca municipality gathered on Friday at the municipal garage. Similar events are to also take place in Nicosia, Limassol, Famagusta and Paphos within the coming weeks.

Larnaca district Peo representative, Constantinos Kyriacou, did not rule out industrial action if municipalities do not agree to go along with their proposal.

“This is a very serious issue. We have been trying for five years for this, but so far, we had no results. Unless we are heard, then yes, we do not rule out strikes,” Kyriacou told the Cyprus Mail.

Municipalities, he said, were forced to hire private companies for garbage collection ever since , the freeze in filling vacant job posts following the economic crisis meaning their own crews were not in a position to cope with the workload.

“When people retire, or are no longer able to cope with the physically straining duties of this profession, their posts remain vacant and municipalities are forced to outsource,” Kyriacou said.

He added that some municipalities hire private companies or individuals on contracts to assist their own crews and some outsource the entire service.

Even though municipal dustmen don’t directly risk losing their jobs, Kyriacou said, the problem is twofold; this practice will gradually lead to loss of municipal posts as dustmen who eventually retire will no longer be replaced and on the other hand, private garbage collection companies, do not agree to provide collective agreements to their employees, meaning lower salaries, and even illegal employment.

“These crews (municipal dustmen) have mature trade union consciousness. They are struggling for the next generation,” he said.

The unions are proposing to mayors to introduce clustering of garbage collection services among neighbouring municipalities.

“This would upgrade quality of services and reduce costs,” he said.