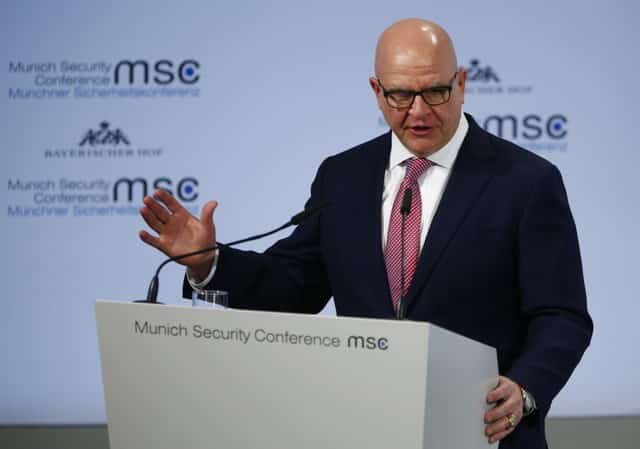 U.S. National Security Adviser H.R. McMaster said on Saturday that, despite denials, public reports showed that Syrian President Bashar al-Assad was using chemical weapons, and added that it was time for the international community to hold the Syrian government to account.

“It is time for all nations to hold the Syrian regime and its sponsors accountable for their actions and support the efforts of the Organization for the Prohibition of Chemical Weapons,” he said.

McMaster did not specify which public accounts or pictures he was referring to.

Earlier this month, U.S. Defense Secretary Jim Mattis said the Syrian government had repeatedly used chlorine gas, but stressed that the U.S. did not have evidence of sarin gas use.

French President Emmanuel Macron has said that “France will strike” if chemical weapons are used against civilians in the Syrian conflict in violation of international treaties, but that he had not yet seen proof this is the case.

The Syrian government has repeatedly denied using chemical weapons and said it targets only armed rebels and militants.

In recent weeks, rescue workers, aid groups and the United States have accused Syria of repeatedly using chlorine gas as a weapon against civilians in Ghouta and Idlib.

Earlier this month, Syrian government forces, who are backed by Russia and Iran, bombarded the areas, two of the last major rebel-held parts of Syria.

Diplomatic efforts have made scant progress towards ending a war now approaching its eighth year, which has killed hundreds of thousands of people and forced half the pre-war Syrian population of 23 million from their homes.

McMaster called on the international community to do more on North Korea.

“We must pressure the Kim regime, using all available tools, to ensure that this cruel dictatorship cannot threaten the world with the most destructive weapons on earth,” he said, referring to North Korean leader Kim Jong Un.

The United States has appeared to endorse closer post-Olympics engagement between North and South Korea with an eye to eventual U.S.-North Korean talks, but has agreed with Seoul that sanctions must be intensified to push Pyongyang to negotiate an end to its nuclear weapons program.

The prospect of negotiations comes after months of tension over North Korea’s nuclear and missile programs, in which U.S. President Donald Trump and the North Korean leader traded insults and threats, while the U.N. tightened sanctions.

“Nations that evade full enforcement and fail to take these steps are acting irresponsibly, now is the time to do more,” McMaster said, calling on countries to cut off military and commercial ties with Pyongyang.

Mexico helicopter crash kills 13 on ground in wake of earthquake