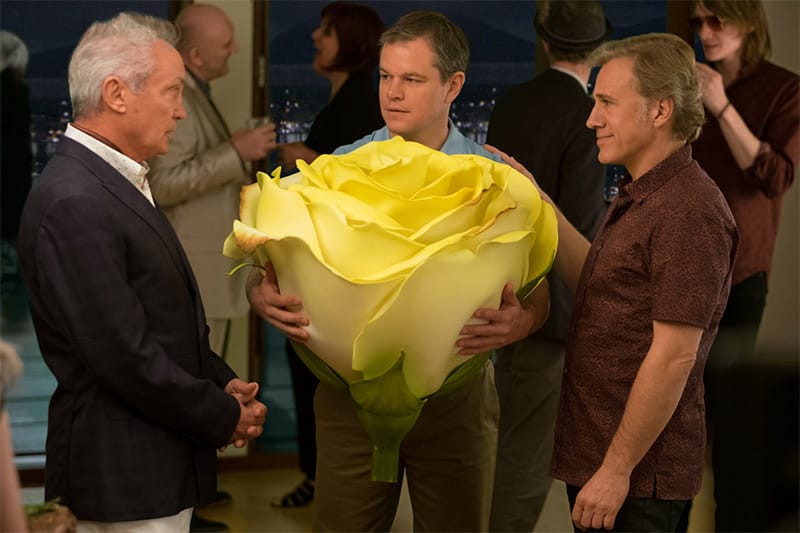 I was all set to write about Black Panther, a superior comic-book blockbuster in an excellent week for new releases – but then characters started arguing about a made-up metal called vibranium and I knew I should write about Downsizing, a film about the state of the real world today. (To be fair, Black Panther too is quite political.) This is a deeply-felt comedy with a slight problem, the kind of problem you’d expect in a film made by serious-minded, middle-aged Hollywood royalty: it’s more interested in pontificating on inequality, failed idealism and human nature – i.e. the state of the real world today – than it is in its science-fiction premise, even though that premise is why most viewers will be watching in the first place.

It’s not that Downsizing doesn’t care about downsizing – but let’s say it’s more interested in the ‘why’ than the ‘how’. ‘Downsizing’ is the term for a new process, in a near-future much like our own, where customers pay to be shrunk to about one-thousandth of their size; it seems a perverse (and of course irreversible) thing to do to oneself – but it’s a boon for the environment, small people leaving hardly any footprint in a world of climate change and overpopulation. The deeply eco-minded (and of course Norwegian) scientists who come up with the concept hope that ‘going small’ will save humanity – but in fact, in the real world, those who agree to be downsized couldn’t care less about the planet; all they care about is that, in an economy geared to the normal-sized, buying only small portions allows you to live like a king. That’s the best joke in this cynical satire.

If only it had stayed at cynical satire – but in fact the second half, set in a newly-trendy ‘microcommunity’, it turns political in a way that doesn’t really have much to do with downsizing. Paul Safranek (Matt Damon) is our hero, who decides to go small along with his wife Audrey (Kristen Wiig) – only for Audrey to drop out, leaving him five inches tall and alone. This is par for the course for Paul, a bruised idealist and one of those well-meaning boobs who often feature in the films of director Alexander Payne (the best one is probably Jim McAllister, the teacher played by Matthew Broderick in Election): he’s forever trying to help – he delights in showing co-workers how they can prevent carpal tunnel with a few simple exercises – but his help tends to be ignored. Twice in the first few minutes we see him coming home bringing food for someone (once for his mum, once for Audrey), only to be told that the other person already ate.

Paul is unhappy, wishing he’d stayed normal-sized – but then he meets two people who change his mind, first a sleazy Serbian businessman (Christoph Waltz) with a penchant for throwing wild parties, then a Vietnamese dissident (Hong Chau) who shows him an entire underbelly of slums and low-paid workers, proof that downsized capitalism is just as unequal as the bigger version. To be honest, none of this requires our hero to be tiny; much the same film could’ve been made in any somewhat-isolated setting. It’s hard not to feel that Payne and his co-writer Jim Taylor started with the premise then lost interest, using it as a springboard for bigger, subtler points.

Are those points worth the bother? That’s to say, does the film’s complexity and sophistication make up for how misshapen it is? Mileage may vary, but for me the answer is yes. I’d have liked to see more details of downsized life (the actual procedure is shown in harrowing detail), but Payne’s larger message is the clash between idealism and good old (i.e. bad old) human nature. The Norwegians return in a final act which, again, seems misshapen – it should’ve been a punchline whereas it feels like a whole other movie, bumping the running-time to an overlong two-hours-plus – once again lamenting the imminent end of humanity, only to be countered by Waltz in a speech so blithely cynical and non-ideological (and of course ‘irresponsible’) it almost had me cheering in the theatre. This is a wry, deeply melancholy comedy with a true and uncomfortable message: people are flawed. We’re not too virtuous, and we’re not too clever. We’ll probably end up destroying ourselves – but at least we have love, and the fleeting capacity to help each other.

Downsizing rambles, when it should’ve been tight. It doesn’t take full advantage of its concept. No-one fights a giant insect, as they do in The Incredible Shrinking Man or Honey, I Shrunk the Kids. Early talk of prejudice against the downsized (a blowhard in a bar tells Paul he ought to have fewer rights, since he contributes less to the economy) leads to nothing. We don’t even learn how a small person could find a small-enough twist of lime to put in their G&T. Yet Payne is gently sardonic, ruefully debunking futuristic sci-fi, and finds a tragic hero in his unappreciated Everyman. If you want thrills, there’s always Black Panther.

Iran finds wreckage of crashed plane on top of mountain

Things that can bust your investment budget