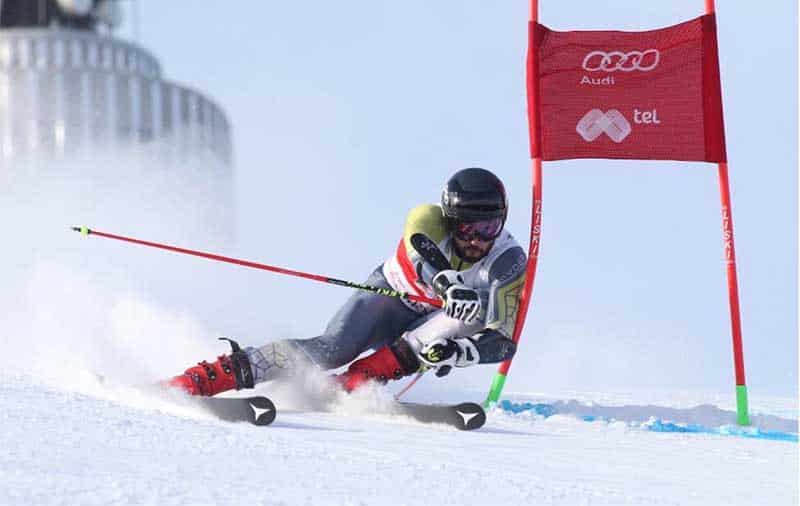 You’ve heard of Pavlos Kontides, our nation’s one and only Olympic medal-winner, who took silver in the Laser Sailing category of the 2012 London Games. But did you know that Cyprus has sent athletes to every Olympic Games since 1980 – both Summer and Winter? Two years ago, in Rio, the island fielded a team of 16; at the Sochi Winter Games of 2014, two alpine ski-iers represented our tiny nation – not bad going for a country which boasts four (tiny by international standard) ski runs! In fact, with the latest Winter Olympics now well underway, there’s now another local ski star to celebrate. He’s 22, he’s competing today, and he’s never been this far away from home…

Okay, that’s a bit of an exaggeration. Dinos Lefkaritis Jr has, in fact, been to any number of places around the world in the course of his short life. He’s placed in races all over Europe, spent the summer of 2016 training in New Zealand, and has even competed in a town known, officially, as the end of the world: Ushuaia, Argentina. But nonetheless, PyeongChang is a world away from the sunny beaches of Larnaca where this rising ski star grew up, and the white peaks of Troodos, where he first took to the snow…

“I started to ski at the age of five, here in Cyprus,” Dinos reveals. “I come from a pretty sporty background!” – both his parents are ski-iers; his father the President of the Cyprus Ski Association – “and this was a hobby that gave me the chance to be close to the snow and to nature – two things I love.” While the young Dinos also enjoyed all manner of other sporting pastimes – “I was very active as a child! Tennis, basketball, a lot of water ski-ing!” – alpine ski-ing was his first love. As were the races and competitions that came along with such a talent. “I was competing nationally from the age of 12, and then, over the years, internationally as well. I thrive on competition: always drawn to races and tournaments, and the pressure that comes with it. I think I work better under pressure!”

Which is probably a good thing, considering that this young star will be the sole representative of Cyprus at the coming Games, not only competing against another 100 or so athletes in both the slalom and grand slalom, but who also carried the flag for his country during the Opening Ceremony. “It’s a great honour!” Dinos beams, “to represent the place you grew up, to carry their flag. And though,” he muses, “the Cyprus flag may not be old in age, it’s very heavy – not physically, but in terms of the weight of history and culture it carries with it.” But just how has a young man from Larnaca ended up as the nation’s standard-bearer at the most prestigious sporting event on earth?

“Persistence, dedication and sacrifice!” Dinos laughs. “And a huge amount of support.” Referencing both his former school (the American Academy in Larnaca, who gave him time off to attend crucial competitions as he was growing up) and his current university (Bates College in the state of Maine, an institution chosen for its balance of academics and excellent sporting programmes), Dinos explains how innumerable people and organisation have all contributed to this coming moment.

“The ski-ing community is wonderful! There’s a lot of help from associations such as the Pan Cyprian Academy of Ski-ing, who play a big role in the sport in Cyprus, giving young kids opportunities to train and travel; the Ski Club Arlberg, a team in Austria I’ve been working with from a very young age; and especially The International Olympic Committee, who have provided me with a scholarship that’s hugely increased my opportunities.” Closer to home, Dinos cites both his parents and his coaches (Milan Matic, Doros Christodoulou, and Micaela Holland) as well as his local gym, Body Control, as “hugely supportive through good times and bad. And there were quite a few of the bad…” 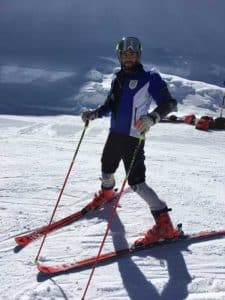 Four years ago, and just two months prior to the Sochi Olympics, a broken leg forced Dinos to pull out of the Games and put him out of competitive sport for two seasons. But he’s back with a vengeance for PyeongChang, and hoping to do his country proud. Racing in the official colours of Cyprus, he’ll be flying through the gates of the slalom on February 22 and the giant slalom today, February 18.

“I’m nervous, but not overly so,” he reveals. “A lot of competing at this level is mental, and when you’re there, at the start, you think of nothing other than the gates and the course. That’s your whole world, it’s all that matters in that moment.” Vying with athletes from countries such as Austria and Switzerland where winter sports are commonplace, Dinos’ dream result would be “to make the top 30. Cyprus,” he explains, “is not what you’d traditionally call a winter nation! But nevertheless, we manage to produce athletes who qualify for the Olympics time after time.” This year, six of the Cyprus Ski Team qualified for the Games, an incredible achievement and testament to hard work and excellent training. But a complicated global quota system meant that only the country’s top ski-ier could attend.

“The team is amazing,” Dinos continues. “All very supportive when we found I’d qualified. And I feel the responsibility to do my best, both for the people who’ve backed me and for Cyprus itself.” Ultimately, though, it’s the Olympic spirit which most moves the young athlete: “Of course it’s a competition with winners and losers, but it’s the taking part that counts. A lot of people have asked if I’m expecting a medal. But just making it to the greatest winter sporting competition on earth is a huge achievement in itself. And that’s enough!”

Follow Dinos’ progress at the Winter Olympics via Facebook (‘Dinos Jr Lefkaritis’) or Instagram (dlefkaritis6). Updates will be posted regularly by the Cyprus Olympic Committee on www.olympic.org.cy

Things that can bust your investment budget