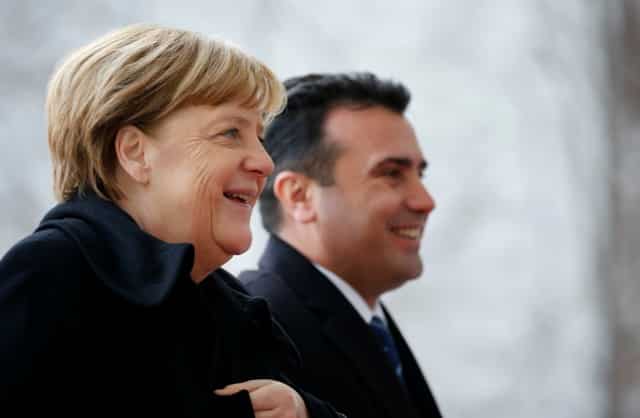 Macedonia is making headway in its bid to join the European Union, German Chancellor Angela Merkel said on Wednesday, praising recent reforms by Skopje and the prospect of settling its chronic name dispute with Greece.

Macedonia is among six Western Balkan nations seeking membership. The EU, though wary of admitting a region scarred by ethnic wars and with a reputation for organised crime, but also keen to blunt creeping Russian influence there, has launched a new integration campaign.

“It is also necessary because it is part of the conditions for moving ahead with talks on EU membership,” said Merkel.

She homed in on progress in a dispute with Greece over Macedonia’s name which has thwarted Skopje’s ambitions to join Nato and the EU. The two have agreed to step up talks this year to try to resolve the row before a Nato summit in the summer.

Greece, which belongs to both Nato and the EU, objects to the landlocked Balkan country’s use of the name Macedonia, arguing that it could imply territorial claims over its own northern region of the same name.

“I am very pleased and relieved that .. there is movement in the talks,” Merkel said. “In the last 10 years, the solution has not been as close as now and it would be wonderful if the remaining difficulties can be bridged.”

Talks between the two states have been inconclusive since 1991, when Macedonia withdrew from former Yugoslavia. It was admitted into the United Nations in 1993 under the name Former Yugoslav Republic of Macedonia (Fyrom).

But Skopje said earlier this month it was ready to add a geographical qualifier to its name to help resolve the dispute.

The other western Balkan states are Serbia, Montenegro, Kosovo, Bosnia and Albania.

In an interview with Reuters, Albanian Foreign Minister Ditmir Bushati said he believed his country, and its neighbours, could join the EU in a decade. Asked about the degree of sway Russia, Turkey or China hold in the region, he said: “The Western Balkans are viewed as a geostrategic chess board.”

Albania welcomes investment from other countries, including Japan, he said, but stressed there was no alternative to the EU membership process.

Merkel also promised to try to speed up the sometimes slow process of freeing up EU funds earmarked for the Balkans.

“We Europeans sometimes need too long. It’s not necessarily a question of how much but of how long it takes,” said Merkel, pointing to lengthy planning procedures for projects such as motorway construction which could frustrate local people.