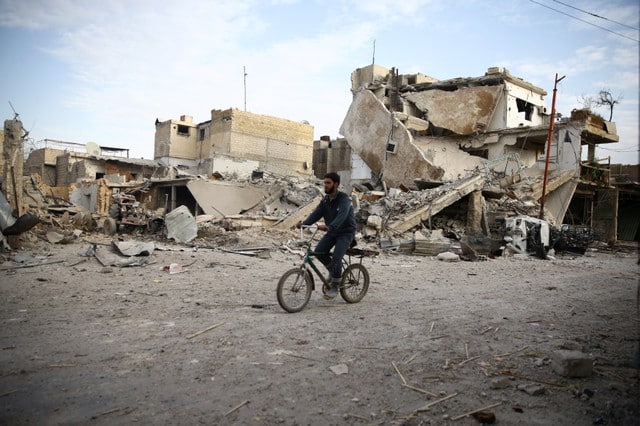 Residents of Syria’s eastern Ghouta district said they were waiting their “turn to die” on Wednesday, amid one of the most intense bombardments of the war by pro-government forces on the besieged, rebel-held enclave near Damascus.

At least 38 people died on Wednesday. At least 310 people have been killed in the district since Sunday night and more than 1,550 injured, the British-based Syrian Observatory for Human Rights war monitor said.

The eastern Ghouta, a densely populated agricultural district on the Damascus outskirts, is the last major area near the capital still under rebel control. Home to 400,000 people, it has been besieged by government forces for years.

A massive escalation in bombardment, including rocket fire, shelling, air strikes and helicopter-dropped barrel bombs, since Sunday has become one of the deadliest of the Syrian civil war, now entering its eighth year.

“We are waiting our turn to die. This is the only thing I can say,” said Bilal Abu Salah, 22, whose wife is five months pregnant with their first child in the biggest eastern Ghouta town Douma. They fear the terror of the bombardment will bring her into labour early, he said.

“Nearly all people living here live in shelters now. There are five or six families in one home. There is no food, no markets,” he said.

An air strike warning system run by the Syrian Civil Defence, a rescue service in opposition areas, was by Wednesday afternoon sending alerts every few minutes, triggered when warplanes are spotted taking off from air bases.

“The estimated arrival time for the plane to reach the most bombed parts of eastern Ghouta: … Harasta: two minutes from now,” a typical alert sent at 4:41pm said.

The United Nations has denounced the bombardment, which has struck hospitals and other civilian infrastructure, saying such attacks could be war crimes.

U.N. Secretary-General Antonio Guterres appealed on Wednesday for an “immediate suspension of all war activities in eastern Ghouta”. Speaking to the U.N. Security Council Guterres said residents were living in “hell on earth”.

Guterres expressed support for a Swedish and Kuwaiti push for the 15-member council to demand a 30-day ceasefire in Syria. Diplomats said the council could vote on a draft resolution in the coming days. But Assad’s veto-wielding ally Russia has called the proposal “not realistic”.

The pace of the strikes appeared to slacken overnight, only to intensify again later on Wednesday morning, the Observatory said. Pro-government forces fired hundreds of rockets and dropped barrel bombs from helicopters on the district’s towns and villages.

The International Committee of the Red Cross (ICRC) called on Wednesday for humanitarian access to Ghouta, especially to reach wounded people in critical need of treatment.

“The fighting appears likely to cause much more suffering in the days and weeks ahead,” said Marianne Gasser, ICRC’s head of delegation in Syria. “This is madness and it has to stop.”

Medical charity Médecins Sans Frontières said on Wednesday 13 hospitals had been hit and damaged or destroyed in the past three days.

The Syrian government and its ally Russia, which has backed Assad with air power since 2015, say they do not target civilians. They also deny using the inaccurate explosive barrel bombs dropped from helicopters whose use has been condemned by the United Nations.

The Observatory said many of the planes over Ghouta appear to be Russian. Syrians say they can distinguish between Russian and Syrian planes because the Russian aircraft fly higher.

Kremlin spokesman Dmitry Peskov on Wednesday described as “groundless” accusations that Russia bears some of the blame for civilian deaths in eastern Ghouta.

A commander in the coalition fighting on behalf of Assad’s government told Reuters overnight the bombing aims to prevent the rebels from targeting the eastern neighbourhoods of Damascus with mortars. It may be followed by a ground campaign.

“The offensive has not started yet. This is preliminary bombing,” the commander said.

Eastern Ghouta is one of a group of “de-escalation zones” under a diplomatic ceasefire initiative agreed by Assad’s allies Russia and Iran with Turkey which has backed the rebels. But a rebel group formerly affiliated with al Qaeda is not included in the truces and it has a small presence there.

Conditions in eastern Ghouta, besieged since 2013, had increasingly alarmed aid agencies even before the latest assault, as shortages of food, medicine and other basic necessities caused suffering and illness.