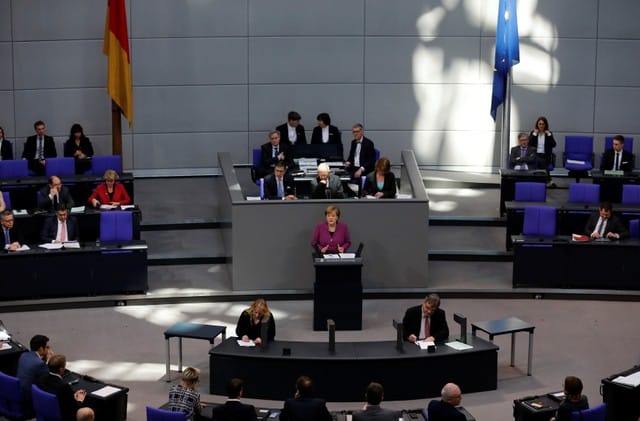 Brexit offers the European Union an opportunity for a broad rethink of its financial set-up, German Chancellor Angela Merkel said on Thursday before an EU summit that will tackle the bloc’s future budget.

Addressing the Bundestag (lower house of parliament), Merkel made clear that the future of the EU would be a priority in her fourth term, provided a coalition deal between her conservatives and the pro-EU Social Democrats is approved by SPD members.

“We need a new start for Europe,” said Merkel, adding the looming debate on a new budget for the 27-member bloc after Britain’s withdrawal in 2019 could lead to some major changes.

“The debate about the future financial framework is also a chance to look at the finances of the EU as a whole,” she said.

Leaders at Friday’s summit will discuss whether to boost the next seven-year budget to pay for common policies on security, defence and migration between 2021 to 2027.

Germany, Europe’s biggest economy, is the biggest net contributor and has said it is ready to pay more although some others, including the Netherlands, argue that a smaller bloc – without Britain – implies a smaller budget.

Merkel sought to reassure those in her conservative bloc who are more sceptical about deeper EU integration and paying out for poorer, debt-ridden member states.

“Solidarity cannot be a one-way street,” she said.

“The stability and growth pact will remain the compass for Europe,” she added, reiterating that liabilities and supervision must go hand in hand as part of any eurozone reform.

Taking aim at some eastern European members, Merkel also said the bloc’s structural funds should in future be linked to taking in foreign migrants. Eastern members with right-wing nationalist governments have rejected an EU burden-sharing plan for migrants coming from the Middle East, Africa and Asia.

“With the distribution of structural funds, we must ensure that the allocation criteria in future reflect the engagement of many regions and municipalities in absorbing and integrating migrants,” she said.

That idea is “political blackmail,” said the far-right, eurosceptic Alternative for Germany (AfD), which will be the main opposition party if a “grand coalition” goes ahead. The AfD made clear it rejects bigger payments to the EU.

“Germany is going from teacher to taskmaster to paymaster,” Alexander Gauland, head of the AfD’s parliamentary group, said to applause from his lawmakers in a riposte to Merkel‘s address.

The chancellor, at risk of being supplanted as Europe’s most influential leader by French President Emmanuel Macron, said the EU should be more ambitious in developing a response to growing global political and economic pressures.

“More than ever we need European answers to the pressing, big questions of our time,” she told the Bundestag, urging the EU to adjust to digital advances in technology to be able to compete economically in the future.

Macron has offered an ambitious vision for Europe, but has had to wait for a response from Germany, due in part to Merkel‘s protracted attempts to cement a governing coalition.

She emphasised that European policy would be front and centre in a new grand coalition with the Social Democrats, which would be a repeat of her last coalition that prevailed up to the Sept 24 election.

“Germany can only do well in the long run if Europe does well,” she said. “It is no coincidence that the first chapter of the coalition agreement is on Europe”.

The coalition parties have agreed on a deal but SPD rank-and-file are voting to approve it. The result is due on March 4.