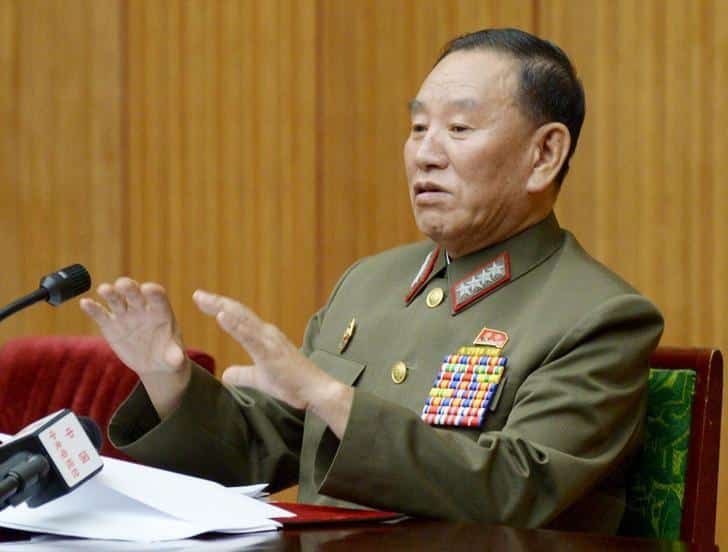 North Korea will send a high-level delegation to South Korea for the Winter Olympics closing ceremony, officials said on Thursday, including the man blamed for the 2010 sinking of a South Korean navy ship that killed 46 sailors.

The latest visit by officials from the normally reclusive North will coincide with a visit by a US delegation led by President Donald Trump’s daughter, Ivanka.

The North Korean delegation will be led by Kim Yong Chol, vice-chairman of the ruling Workers’ Party’s Central Committee, and will stay for three days from Sunday, South Korea‘s Ministry of Unification said in a statement.

He was previously chief of the Reconnaissance General Bureau, a top North Korean military intelligence agency, which South Korea blamed for the deadly 2010 sinking of the Cheonan, a South Korean navy corvette.

South Korean Unification Minister Cho Myoung-gyon said the torpedo attack on the boat was carried by the North but the government had not been able to confirm exactly who was responsible.

North Korea denied having anything to do with the sinking.

“Kim is in charge of South Korea affairs, which is why we’re accepting him as we believe it would help improve inter-Korean relations and resolve the matter of denuclearisation”, Cho told parliament.

The Winter Olympics in South Korea have given a big boost to engagement between the two Koreas after more than a year of sharply rising tension over the North’s missile tests and its sixth and largest nuclear test in defiance of UN sanctions.

Kim Yo Jong and the North’s nominal head of state were the most senior North Korean officials to visit the South in more than a decade.

The sister was the centre of a frenzy of international attention, especially when she appeared at the opening ceremony and stood only a few feet from US Vice President Mike Pence.

She will not be part of the delegation coming to the closing of the Games.

However, South Korea had decided to accept the delegation for the good of the Games, a presidential official in Seoul said on condition of anonymity.

The official said South Korea had informed the United States of the visit and they were in talks about Kim Yong Chol’s entry into the South.

The eight-member delegation coming to the closing ceremony would travel by road and would meet South Korean President Moon Jae-in, an official in Moon’s office said.

Nam Sung-wook, a professor of North Korean studies at Korea University in Seoul, said the North was sending a message by including Kim Yong Chol in the delegation.

“Given Kim Yong Chol’s reputation as the mastermind behind the Cheonan sinking, the North could believe his meeting with Moon would help dilute the negative image of him and the country”, Nam said.

Ivanka Trump would have dinner with Moon on Friday and she had no plan to meet the North Korean officials, a senior US administration official said.

Pence had been scheduled to meet Kim Yo Jong before the North Koreans cancelled the meeting at the last minute, US officials said.

Nam said the North Korean delegation would not want to be over-shadowed by Ivanka Trump.

The South’s Unification Ministry did not specify where Kim Yong Chol’s delegation would stay.

Kim Yo Jong and her entourage stayed at a five-star riverside hotel in Seoul.

Some South Korean opposition legislators and conservative groups have questioned the amount South Korea spent on the North Korean delegation that attended the opening of the Games.

A South Korean government official said 240 million won ($223,000) had been spent on Kim Yo Jong and her entourage during their three-day visit.

The International Olympic Committee paid about $50,000 for the training and preparation of North Korea‘s 22 Olympic athletes, or about $2,300 each.

None of the athletes has won a medal.

Mercedes and Hamilton hope to start season with new deal