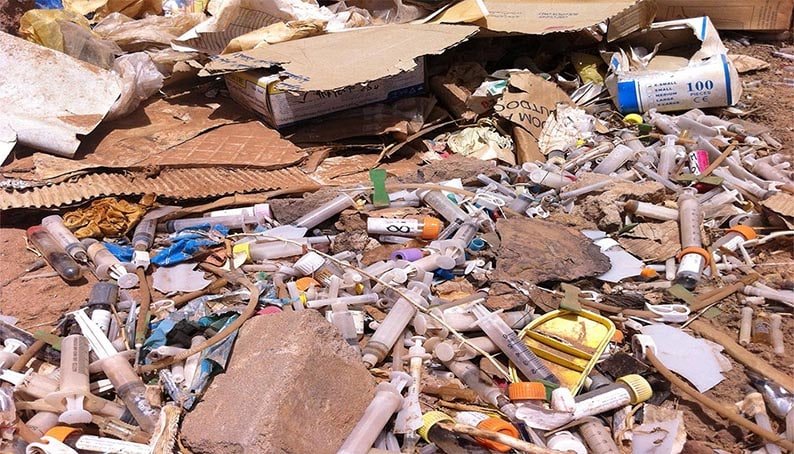 Authorities said on Thursday they had launched a probe into the improper storage of more than 100 tonnes – more than three months’ worth – of highly hazardous medical waste outside the Kofinou premises of the disposal contractor for state hospitals.

Officials on Wednesday caught employees of the company red-handed loading the waste onto a truck to be transferred to an unknown location and called in the police to guard the unit to make sure no hazardous material exited the premises.

According to the head of the agriculture ministry’s department of environment, Costas Hadjipanayiotou, officials from his service discovered over the past few days large volumes of  infectious clinical waste stored improperly in the outdoor area of the processing unit in Kofinou, without having any prior notification that there was a technical problem with processing and that it was being stored without proper treatment.

The volume of stored untreated waste, he said, was very large in comparison to the quantities collected daily from state hospitals.

“State hospitals contribute 1.2 tonnes of waste per day, that is, around 30-35 tonnes per month. The accumulation of waste in the plant is more than 100 tonnes, meaning about three months of clinical waste,” Hadjipanayiotou told the Cyprus News Agency.

This waste must be immediately managed, he said.

The premises were guarded overnight by police on Wednesday, after officials from the department of environment earlier in the day found some of that waste – clinical infectious surgical waste – camouflaged in other bags ready to be transported to an unknown location.

“This urged us to seek help from the police to monitor the premises during the night so that no waste is transported away to a location unknown to us,” Hadjipanayiotou said.

According to daily Politis, the waste was to be transferred on trucks to be buried somewhere in Paphos. The waste was reportedly not managed properly due to damage to the disposal unit’s equipment.

Hadjipanayiotou said that both his service and the police have launched a probe.

“We are investigating how such great volumes of clinical waste ended up at the management unit, why the necessary disposal treatment did not take place and why the health ministry and the environment department were not informed of the technical problem at the unit,” he said.

He said that the premises had not been checked over the past two to three months, until last Tuesday, where they came across the large volume of waste sitting on the premises without being properly treated.

After the discovery, he said, his service also checked all units that manage clinical waste, and went back to the unit in question on Wednesday, where they caught them red-handed, trying to load the waste and remove it from the premises.

“We were lucky we went there when they were loading the clinical waste onto the truck which was ready to go,” Hadjipanayiotou said.

The champions of dreams